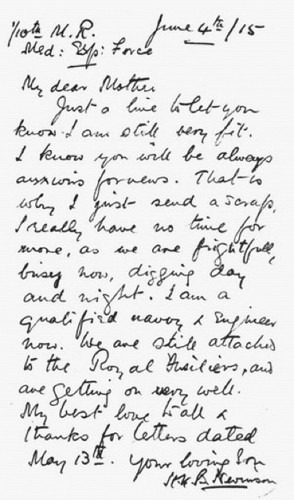 A letter written by a Rutland soldier the day he was fatally wounded jokes how he had become a fully qualified navvy and engineer through all the digging he was doing in Gallipoli. Humphrey Nevinson from Lyndon wrote to his mother very shortly before he was injured in the Battle of Krithia.

He didn’t get a chance to post it and the letter was passed to his family after Humphrey died on board a hospital ship the next day. In the letter he says he is  “still very fit” but “frightfully busy now digging day and night” presumably consolidating the British line. Humphrey served in the Manchester Regiment but was attached to the Royal Fusiliers. The letter has emerged through site user Paul Reeve and Rutland Remembers has been given permission to show it by the Liddle Collection, Brotherton Library of the University of Leeds.