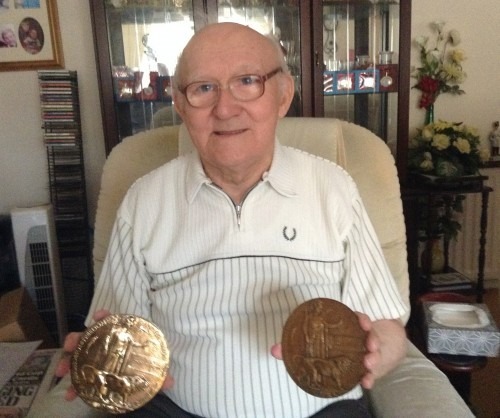 Hugh Steele was one of four brothers from Tixover and Exton who fought in the First World War. Hugh was killed on the first day of the Battle of the Somme, the deadliest of all the battles during the war. Yet he is not remembered anywhere in Rutland. We only know about him thanks to Ken Plant, pictured here, whose wife was his niece and who has fully researched his extraordinary tale.

It gives a great insight into the role the Lincolnshire Regiment played on 1 July 1916. The Battle of the Somme began at 0700 on that date, when the order came for the men to go forward. The Lincolns were held in reserve until 2345 when they were sent over the top to relieve the men of the Sherwood Foresters who were thought by then to be in the German front trenches. But the information was wrong and the Germans were still there and a battle began, with many casualties. Hugh was killed just a few minutes before midnight – one of 20,000 British troops to die on that day.

According to his family, Hugh predicted he would be killed – telling his younger sister Emma that he would not be coming back when waiting with her at Oakham station at the end of his last leave home. Ken also has two uncles who fought and died in the First World War and who feature on the website. One, John Swanson, whose widow’s penny Ken is holding along with Hugh’s, was one of the first to die in the war. He was coming to the end of his 21 years service in the Army when the war began. He was on one of the first ships to leave for France and arrived there on 13 August 1914. Within 13 days he had died, in the Retreat from Mons.