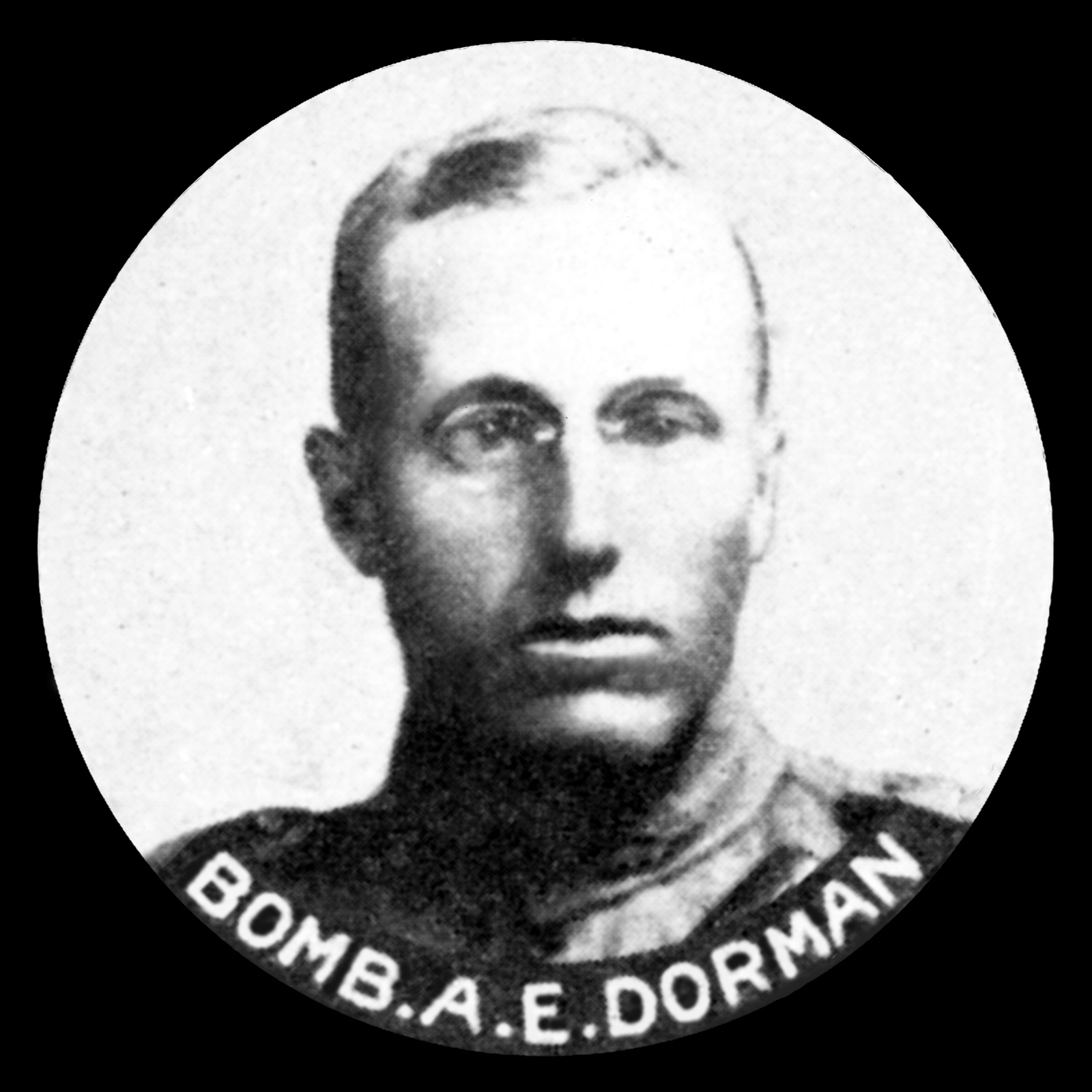 Bombardier Arthur Edward Dorman, originally from Uppingham, was recommended for a medal for his bravery in action. He was born in the town on 9 March 1888, the son of Edward and Emlia Jane Dorman, of Adderley Street. Arthur emigrated to Australia in January 1912 and worked as an electrician in Sydney. He enlisted on 5 August 1914, the day after the outbreak of war, and served with Ist Australian Field Artillery as a driver. He embarked on board HMAT Argyllshire from Sydney on 18 October 1914 and served in Egypt, Gallipoli and France. Arthur was killed by machine-gun fire during the Battle of the Somme, on the morning of the 14 November 1916, while laying wires in advance of a front line trench. His artillery unit was supporting 2nd Australian Division attacking German trenches known as Gird and Gird Support near the Butte de Warlencourt. Arthur's officer, who was with him at the time, wrote: "I always selected him for this work on account of his coolness and courage under fire at all times. I am intensely proud of all my lads in headquarters, but of none more than he. I have many times been with him where one would deem it impossible to live, and a more loyal, brave and courageous man never existed. I have twice recommended him for conspicuous bravery." The following is a recommendation for award for gallantry made by Lieutenant Colonel S M Anderson, Commanding 1st Australian Field Artillery Brigade: "From the 20-29 July this NCO showed remarkable endurance and daring in his work as linesman, maintaining telephone lines from Artillery Liaison Officer, Right Battalion to Brigade Headquarters. He has constantly been under shell and rifle fire, but despite exhaustion, continued to work until he was knocked down by the concussion of a 5.9" shell. He was considerably bruised and shaken, but otherwise unhurt and resumed work next afternoon. The gallant work of this man has been beyond praise." Arthur is buried in Warlencourt British Cemetery, grave II.F.15, and remembered on the war memorial in Uppingham.  His cousin Charles Percy Dorman also died in the First World War.

Arthur's great niece Liz Neeves has supplied us with valuable new information about Arthur (see below) including the fact he emigrated to Australia in 1912. His official record for being included on Australia's Roll of Honour shows he served in the Leicestershire Yeomanry while he was still in England. It seems he was not awarded a medal after all despite his Commanding Officer's recommendation.

Bombardier Arthur Edward Dorman was my great uncle [brother of my grandfather, Thomas Augustus Dorman of Uppingham]. Arthur had emigrated in January 1912 to start a new life in Australia, but only 2 years later he enlisted in the Australian 1st Field Artillery Brigade and sadly on 14 November 1916 was killed in the Battle of the Somme repairing telephone lines in front of a frontline trench. My family and I visited Warlencourt Cemetery near Bapaume which left an emotional and lasting impression on us all. We are so proud of him. Other members of our family have subsequently visited his grave and the surrounding area. My brother, Edward Dorman [named after Arthur Edward!] continues to live and work in Uppingham.
By Liz Neeves on Sunday 15th June '14 at 11:53am
I believe Arthur won the MM. He was recommended for a gallentry award. His records survive and are in the Australian archives.
By Rutland Poacher on Monday 16th June '14 at 12:21pm