Rutland and the First World War

England's smallest county played its full part in the First World War. At a time when duty and fervent patriotism meant something stronger than they probably do today, men from Rutland could be found serving in dozens of different regiments and on many ships of the Royal Navy. Others took to the air in the Royal Flying Corps, later the Royal Air Force, where two women served as well.

Rutland lost 5% of its male population

There was a surge in recruitment after news came through of the Retreat from Mons and then a slow tailing off as early enthusiasm waned. Men who were held back under the Derby scheme were then called up and conscription was introduced in 1916. Rutland lost five per cent of its male population but some villages suffered even more grievously. Ayston lost 22 per cent, including three sets of brothers. Oakham lost 118 young men, one street alone more than a dozen.

Most of Rutland's citizen soldiers joined the army, filling the ranks of neighbouring county regiments, the Leicesters, the Northants, the Lincolns, and the Sherwood Foresters. As such they took part in all the set piece battles which led to such a terrible loss of life - at Loos, Gallipoli, the Somme, Paschendaele - names which have become bywords for the horrors of the First World War. A handful joined the Navy and some of those fought in the great Battle of Jutland. None could have foretold what lay ahead of them as they left this small, rural community in the heart of England and became part of the first industrialised war of attrition. 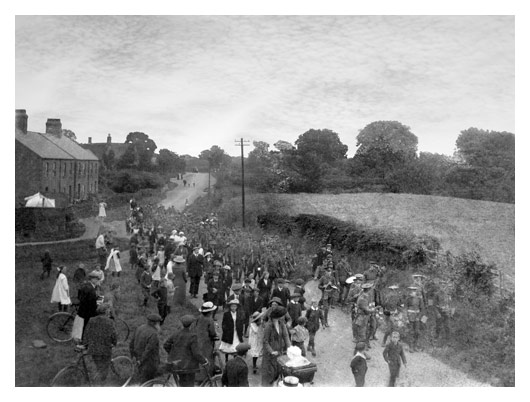 Individual lives counted for almost nothing, as the armies hurled ever more devastating shells and bombs at each other. Most soldiers who died were killed not by rifle fire but by artillery. Their deaths were announced by telegram, sometimes followed by an officer's letter which generally tried to lessen the blow by describing how the man died instantly. It was unusual to mention the agonies of wounds or being blown to pieces, although some letters were more graphic than others. And so they passed into history.

No wonder then, in the years immediately after the First World War, towns and villages set about raising money to remember their Fallen with plaques, memorials, buildings and scrolls. These are the visible signs today of how the First World War was felt in both Rutland towns, every village, every hamlet and every street. Many familiar County names are among them. And so Rutland's part in the war to end wars is remembered, and a hundred years later we remember it still.