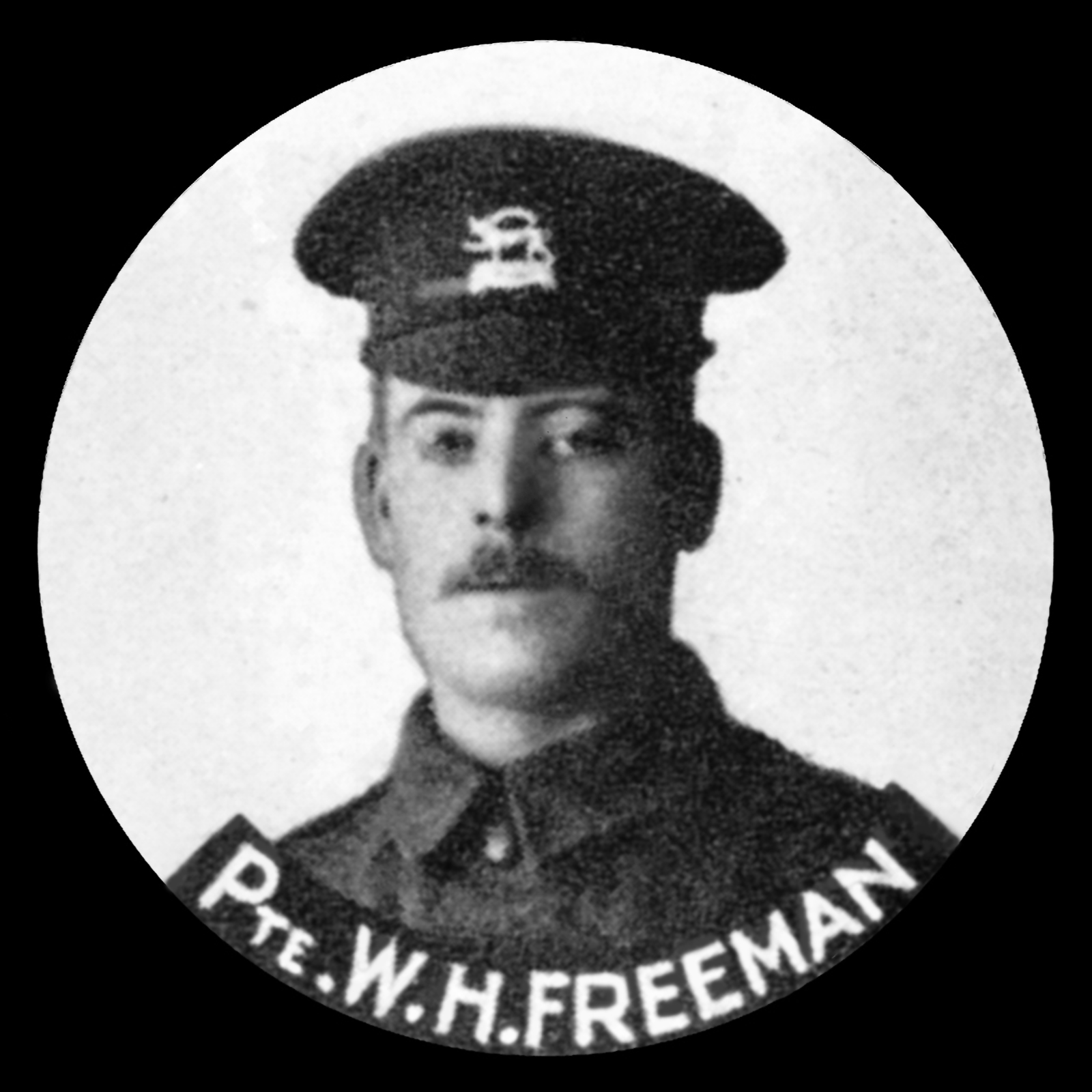 William Henry Freeman was born in Market Overton on 22 April 1894, the son of Arthur Freeman and his wife. He worked in engineering before joining up on 1 September 1914 with the 7th Battalion Leicestershire Regiment. He was sent out to France on 29 June 1915, and in July 1916 was on the Somme where his battalion formed part of 110th Brigade. A major British attack was being planned and while they waited for orders the Leicestershires were occuping Bottom Wood near Fricourt. On 12 July the battalion war diary said an intermittent enemy bombardment caused about 30 casualties. On 13 July "after a more or less slow bombardment all day including 77mm guns the battalion was relieved and marched back for rest at Fricourt." William was reported missing on this day and was later said to have died of wounds on 23 July. George Phillips writes in Rutland and the Great War that inquiries were made at the time through the Red Cross to find out what had happened, but without success. This seems to imply William might have been taken prisoner. He has no known grave and is remembered along with 73,000 others on the Thiepval Memorial, Panel 3A, and also on the gates of St Peter and St Paul Church in Market Overton.

The year after William Henry Freeman died, his brother Frederick named his only son William Henry in memory of his much loved brother.
By CFD on Saturday 13th December '14 at 8:57pm
William was born in 1894 and baptised in Market Overton parish church, St Peter and St Paul, on June 10. He was one of four children born to Arthur (1865-?, born Barrow, Rutland) and Susannah (nee Garfitt, 1864-1923, born Baston, Lincolnshire). Arthur worked variously as a waggoner, shepherd and farm labourer. His siblings were Emily Elizabeth (born 1888; she married George Robert Chambers of Caldecott, Rutland); Frederick Arthur (1891-1963; who married Miriam Dawson (1892-1962) of Tinwell, Rutland); and Jessie Rebecca (1899-1971) who married Charles Chambers of Castle Bytham, Lincolnshire.In the 1911 census, 17 year old William is living with his 45 year old father and 47 year old mother in a four-roomed house in Market Overton together with his 19 year old brother Frederick (a soil bearer at the ironstone quarry) and 11 year old sister Jessie. William is working as a navvy stoker at the quarry. In the 1901 census 6-year-old William and his family were living at The Lodge, Pinfold Lane, Market Overton. William is one of ten names on the Market Overton War Memorial In Memory of the men of this Village who gave their lives for their King and Country in the Great War. It forms the gateway to the church and was erected, says George Phillips at a cost of £125. He was one of four William Henry Freemans to die in WW1. The other three were WHF from Leeds, a Sergeant in the Army Service Corps, Mechanical Transport Auxiliary Petrol Company, who died in October 1819 aged 29, buried at Mont Huon Military Cemetery, Le Treport; WHF from Bexley Heath, Kent, a gunner in the 25th Siege Battery, Royal Garrison Artillery, who died in August 1916 aged 26, buried at Corbie Communal Cemetery Extension, and WHF from New South Wales, Australia, a private in the Australian Infantry, AIF, 20th Battalion, who died in May 1916 aged 29, buried in the Brewery Orchard Cemetery, Bois-Grenier. The Thiepval Memorial, the Memorial to the Missing of the Somme, bears the names of more than 72,000 officers and men of the United Kingdom and South African forces who died in the Somme sector before 20 March 1918 and have no known grave. Over 90% of those commemorated died between July and November 1916. The photo of William in his uniform took pride of place in his brother Frederick's home. Frederick named his only son after his brother when he was born the year following William's death. In turn Frederick's great grandson was given his name in 1982.
By CFD on Tuesday 28th June '16 at 7:31am