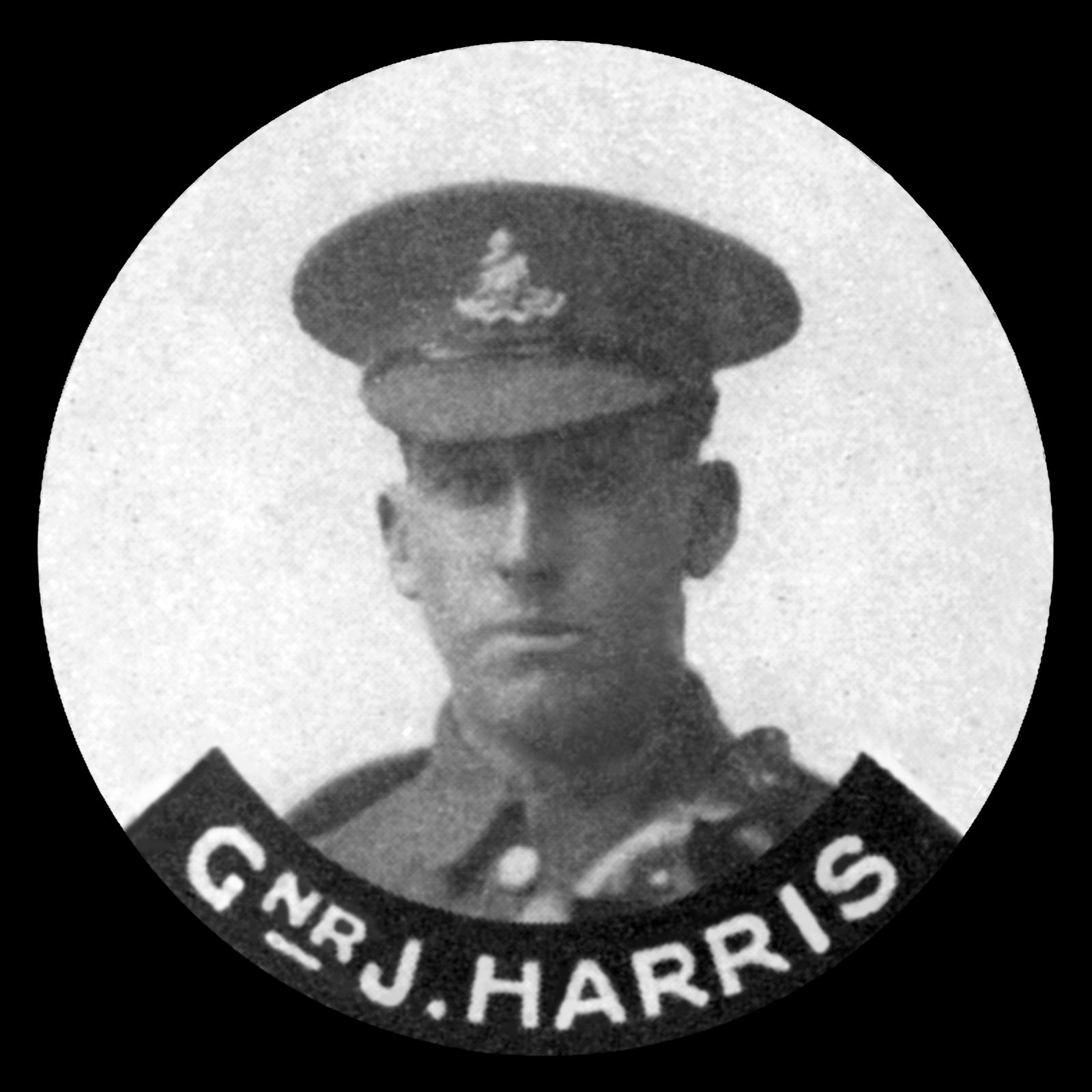 Joseph Harris (Joe) was the son of Joseph and Sarah Harris of Pilton and was born on 16 April 1896. He enlisted in the Royal Field Artillery on 22 January 1916 and went out to France in April the same year, serving with C Battery, 159th Brigade. After his death in October 1918, aged just 22, a fellow soldier in the same Company sent a fascinating letter to his sister. It said: "I have been round to a few of the old boys, but hardly any of them remember the exact time Joe joined them, but as far as I can gather it was about September or October, 1917. He got his first baptism of shell fire at a place called Steenbeek [name of a stream running across the battlefield], which is on the left of Ypres. He must have been broken into it very abruptly for Steenbeek was a terrible place at the best of times, even when things were supposed to be quiet. Christmas 1917, the Division was out on "Rest" at a village called "Legingham" [?], after which they went back into action pretty near the old place, but a little to the right called "Langemarch" [Langemark]. Everyone who has ever been to France [Belgium] knows these two places. A piece of poetry was written by a soldier, who had been badly wounded, about a duck board track which led up to the "line." It is called "The Fatal Wooden Track." Scores of times I have been up and down that track, and I don't think I have ever seen it complete, or without a few killed lying by it, above half a dozen times. A working party was continually putting down new duck boards. Then the Germans advanced and our division was sent to a place called Bray [Bray-sur-Somme] on the Somme. From here we gradually retired until "Jerry" was held at a place called Braille [?]. Then things quietened a bit and the battery went into position near Senlis. This was in May 1918, and it was here I joined them. In June we entrained at Doullens and got out at Argues. After a few days travelling, we went into action at Dickebusch, and from there to just in front of Mount Kemmel. Here again I left the battery for fourteen days' leave. I was in the "Tank Gun detachment" and when I was sent down for a few days rest and went on leave, Joe was sent to take my place. When I came back Mount Kemmel had been taken by our boys. From there we went into a "silent" four-gun position at a place called "Belgian Battery Corner" between Vlamertinghe [Vlamertinge] and Ypres. We had a couple of guns active about a quarter mile from the silent position. From here we used to fire a few hundred rounds each night on Jerry's machine gun emplacements. Joe was one of our detachment, there were four of us. It was here that the first preparations for the final big stunt were made. September 6th, 1918, we moved at midnight to Ypres, near the Gas Works. We laid low during Friday, not moving away, else we should have been seen. Friday night we got about a thousand rounds ready and at 5.31am Saturday we started to send them over. The rest of the tragedy you know." Joe Harris was killed by a shell on 1 October 1918, and was buried at Lijssenthoek Military Cemetery, near Poperinghe, grave XXIII.A.21A. He is remembered on Pilton's war memorial.