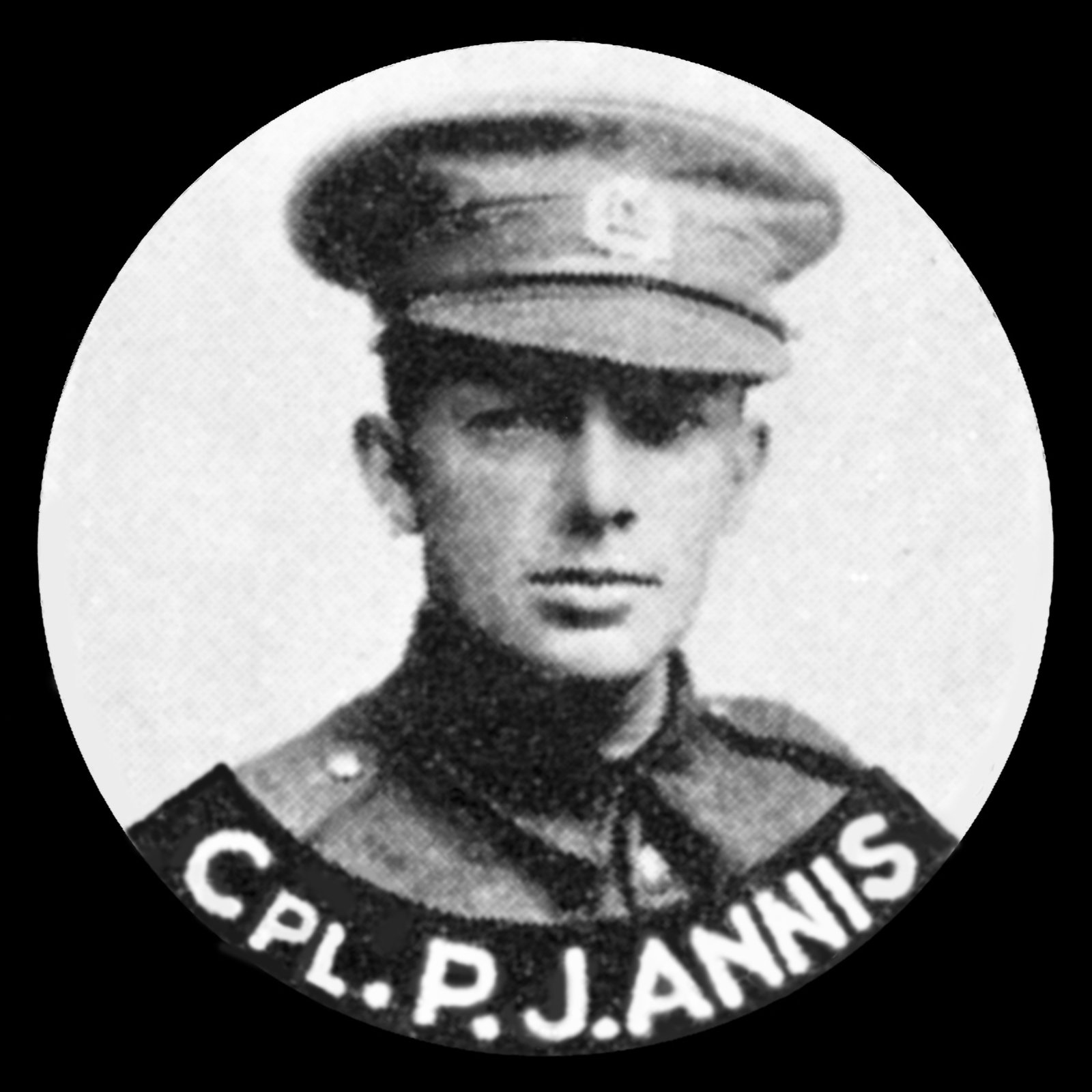 Percy John Annis was one of two sons of William and Mary Ann Annis and both died in the First World War. Their parents, originally from Teigh and Oakham respectively, had lived in Edmonton, north London where Percy was born on 11 November 1888. His younger brother George Annis was born there two years later. In April 1911 Percy set sail for a new life in Canada, leaving Liverpool on the Tunisian where the ship's register records him as "a farmer going to Winnipeg." He worked as a farm labourer for the Sirrett family which had taken a Western Land Grant in Manitoba. When war broke out, he headed home on the White Star ship Megantic, arriving back on 16 November 1914. He joined up in Melton Mowbray in December, enlisting in the Leicestershire Yeomanry. In late May 1915, 204 men and two officers paraded at the Drill Hall in Melton Mowbray. After speeches, the contingent, led by the Regimental Colonel and the Regimental Band, marched to the railway station and departed for France. The Yeomanry had suffered heavily in the Battle of Frezenburg in mid-May and these men were going out as replacements. Having landed in France on 27 May, the contingent joined the 1/1st Leicestershire Yeomanry at Ypres. In March 1916 Percy was detached from the Yeomanry to join the newly-formed Machine Gun Corps (Cavalry) eventually becoming a member of 8th Squadron. The circumstances of Percy's death are recorded in the Cavalry Journal in an article by Captain T Preston MC who commanded 8th Squadron. It says on 23 March 1918 the Germans attacked Frieres Wood and Frieres-Faillouel village on the third day of their big Spring Offensive. The day opened with thick fog, at one stage so thick that the left-hand guns of 8th Squadron could not see at all and were in danger of being cut off. The Germans suffered heavy casualties against two killed on the British side including 'Corporal Annis (formerly Leicestershire Yeomanry) and one of the best of the younger NCOs.' George Phillips in Rutland and the Great War says Percy was shot in the head. He has no know grave and is remembered on the Machine Gun section of the Pozieres Memorial, Panel 93. Percy's father William had moved back to Rutland as a widower and settled in Edith Weston where his two sons are remembered on the war memorial. Percy is also remembered on the memorial in Oakham Castle to A Squadron, Leicestershire Yeomanry.

We are grateful to Peter Spooner for much of the information about Percy.

The following comment was sent to us from Peter Spooner from the Leicester Branch of the Royal British Legion.Percy Annis was born in Edmonton London on the 11th November 1887, the son of William and Mary Annis. He was the second of four children, with an older sister and a younger brother and sister. The 1911 Census finds Percy living with his family in Hackney, his occupation is shown as farmer. I must admit, considering London in the 21st Century, this seems a strange occupation for someone living in Hackney. The decision to be a farmer may be linked to the fact that his paternal grandfather was recorded as a farmer in 1867. The book 'Rutland in the Great War' contains a reference to Percy with the information that he was farming in Canada prior to the outbreak of the war and, like many others, returned to England to enlist. This information is supported by the fact that he departed Liverpool on the 6th April 1911 on board the Tunisian, landing in Halifax Nova Scotia Canada on the 14th April. I do not know what was to befall him in Canada but, at some stage he obviously returned to England as, on the 18th April 1914, he again sailed from Liverpool, this time on board the Virginian landing in St John New Brunswick on 27th April. I have not been able to obtain information as to any return sailings.Percy enlisted in the Leicestershire Yeomanry at Melton Mowbray in December 1914. By this time his parents had moved from London to Edith Weston, no doubt linked to the fact that his father had been born in Teigh Rutland. This move is supported by Soldiers Died in the Great War, which records Percy's place of residence on enlistment as Edith Weston. I assume he became a member of the 2/1st Leicestershire Yeomanry and, as Private 2675 P J Annis, he is listed in A Squadron of the 204 Other Ranks of the Leicestershire Yeomanry who, along with two Officers, paraded at the Drill Hall in Melton Mowbray at 6.15am on a morning in late May 1915. After speeches the contingent, led by the Regimental Colonel and the Regimental Band marched to the Great Northern and London and Great Western joint railway station, departing by train at 7.30am. Having landed in France on the 27th May, the contingent joined the 1/1st Leicestershire Yeomanry at Ypres/Wittes on the 31st May 1915 no doubt to replace the casualties sustained during the Battle of Frezenberg.Following the formation of the Machine Gun Corps (Infantry), a decision was taken to form the Machine Gun Corps (Cavalry). The new Corps was made up of the Machine Gun Sections from the Regiments of the Cavalry Brigades, each Squadron assuming the number of their respective Brigade. Thus the 7th Squadron was made up of the Machine Gun Sections of the 1st and 2nd Life Guards and the 1/1st Leicestershire Yeomanry. On the 3rd March 1916 two officers and sixty-nine other ranks are recorded as being detached from the Leicestershire Yeomanry and joining the 7th Squadron. It is not known if Percy joined the Machine Gun Corps (Cavalry) as a member of this initial group or if he was to join later. Initially each Regiment was responsible for providing the required men and then any necessary replacements but, as 1916 progressed, men were transferred into the new Corps, this being completed by November and Regiments were no longer required to provide replacements. In November 1917 the 1/1st Leicestershire Yeomanry was transferred to the 8th Cavalry Brigade in exchange for the Royal Horse Guards and their members of the 7th Squadron were transferred to the 8th Squadron.The circumstances surrounding Percy's death are mentioned in the 'Machine Gun Corps (Cavalry) in France 1916 â€“ 1918', which was published in The Cavalry Journal. The author of the article was Capt. T. Preston M.C., at one time Officer Commanding the 8th Squadron. The document records that on the morning of the the 23rd March 1918 the German attack was pressed on FriÃ¨res Wood and FriÃ¨res-Faillouel Village. The day opened in thick fog, at one stage it was so thick that the left-hand guns of the 8th Squadron, located in an orchard east of FriÃ¨res Wood, could not see to shot their guns and were in danger of being cut off. During the day the 4th, 5th and 8th Squadrons are said to have inflicted severe punishment on the advancing German troops. The 8th Squadron casualties for the day were two killed and two wounded, one of the fatalities is named as 'Corporal Annis (formerly Leicestershire Yeomanry), one of the best of the younger N.C.O.s'. The other fatality is not named but I believe he was 51670 Private Walter Osborne, also a former member of the Leicestershire Yeomanry. There is a report that Percy died having been shot in the head but, as I believe Walter Osborne was decapitated, this information may have been for family consumption.Percy's mother had already lost her other son, his younger brother George, who had died in April 1916. George enlisted in September 1914 and landed in France in March 1915, joining 22nd London (Howitzer) Field Artillery Battery, 8th London (Howitzer) Field Artillery Brigade. On the 21st January 1916 he was admitted to 4th London Field Ambulance suffering from jaundice, on the 25th , still suffering from jaundice, he was transferred to No. 16 General Hospital Le Treport. His condition deteriorated as, on the 18th February, he was transported to England on board the Hospital Ship 'Stad Antwerpen', being classed as 'condition serious'. He died on the 24th April from pneumonia, possibly following an operation for appendicitis, whilst a patient in the University College Hospital London. Five months later Percy's father died, not a good year for the family.Percy Annis and Walter Osborne are commemorated on the Pozieres Memorial. Percy is also listed on the Memorial Tablet in Oakham Church for members of A Squadron of the Leicestershire Yeomanry. Along with his brother George, Percy is also commemorated in Edith Weston Church.
By Jimbo on Sunday 13th July '14 at 10:35am