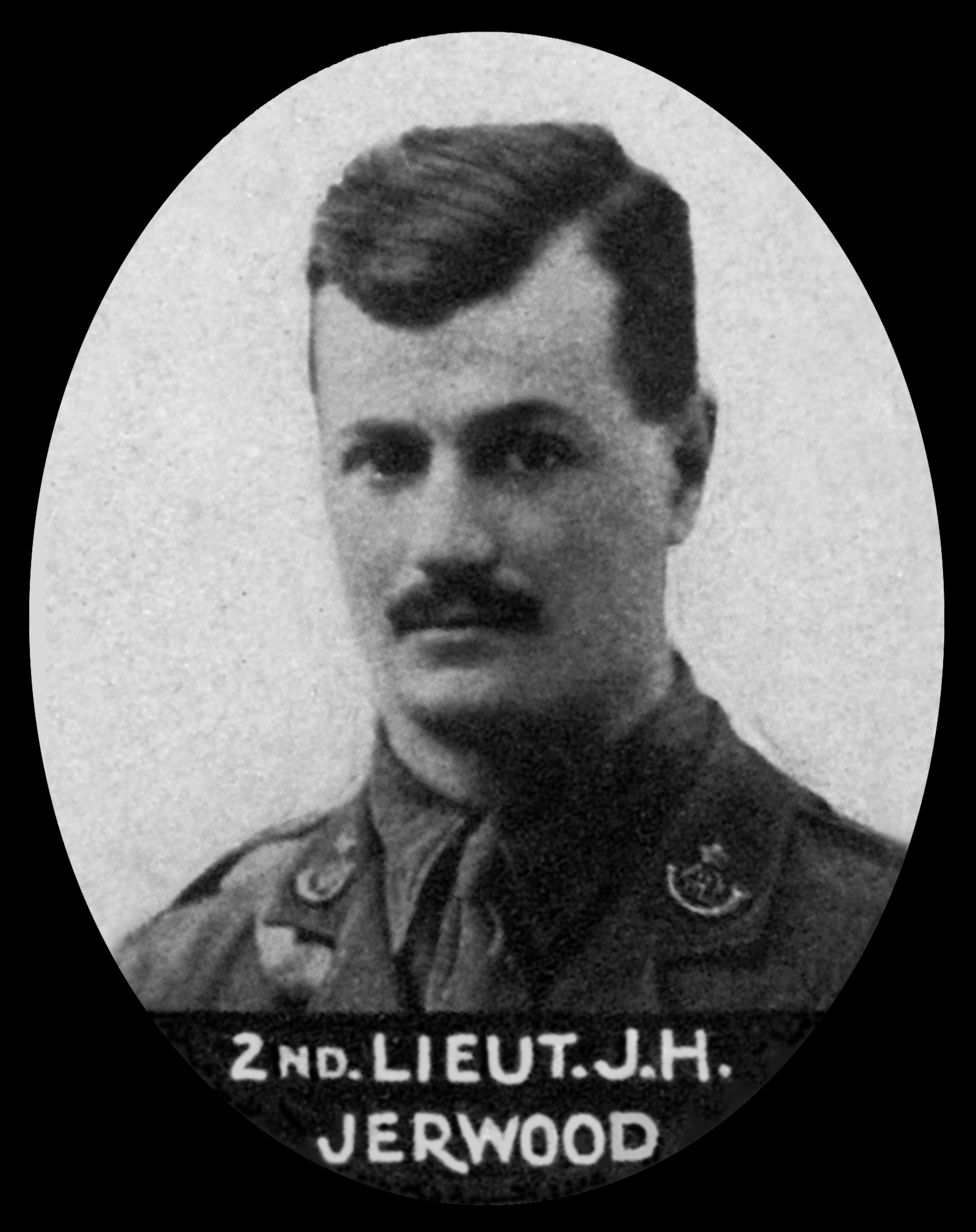 Major John Hugh Jerwood was awarded the Military Cross in 1917 for holding his position as the Germans broke through on both sides of his line. He was the son of The Reverend Canon T F Jerwood, of Little Bowden Rectory, Market Harborough, and brother of The Reverend J H Jerwood, Chaplain of Oakham School. Born at Little Bowden on 1 September 1889, Major Jerwood was educated at Oakham School (where he was head prefect, 1907-8, captain of XI. and captain of XV, 1907-8), and Jesus College, Cambridge (where he stroked Head of River (Lent) 1910, 1911, and Head of River (May) 1912). At Henley he rowed in the Final Heat Grand Challenge 1910, and stroked in the Ladies' Plate again at Henley 1912. He became a schoolmaster, and enlisted as a Private in the Artists' Rifles on 14 August 1914, ten days after the war broke out. Just a month later, he was commissioned as a Second Lieutenant and went out to France on 15 May 1915. In June he was promoted to Lieutenant, in August 1916, to Captain, and in November 1917, to Major. By now in the Durham Light Infantry, he was awarded the Military Cross the same year: "For conspicuous gallantry and devotion to duty. He maintained his position, regardless of withdrawals on his right and left and of the fact the enemy had penetrated the line on both his flanks. He displayed a coolness and fearlessness which inspired all ranks with confidence." John was twice wounded and twice invalided home. He was killed in action, probably by a bullet, near Cerisy, on the 21 March 1918, the first day of the great German Spring Offensive in which 13 Rutland soldiers died. He has no known grave and is remembered on the Pozieres MemorIal to the Missing, Panel 68, as well as in Oakham School Chapel. He is also remembered on the war memorial at Little Bowden, where his father was the Rector for fifty years. After the war his widow remarried and was recorded as living in London.

Panels 68-72 of the Pozieres Memorial.Enlisted as a private in the Artists' Rifles; commissioned (1914), Captain (1916), Major (1918) Durham Light Infantry.His son, Old Oakhamian John Michael Jerwood, was awarded the Military Cross during the Second World War.School photos to follow.
By BN on Tuesday 17th June '14 at 4:23pm

Found on the photo memories of Oakham & Uppingham Facebook page
By John Stokes on Sunday 18th June '17 at 10:37am
A Rutlander, living in Belgium