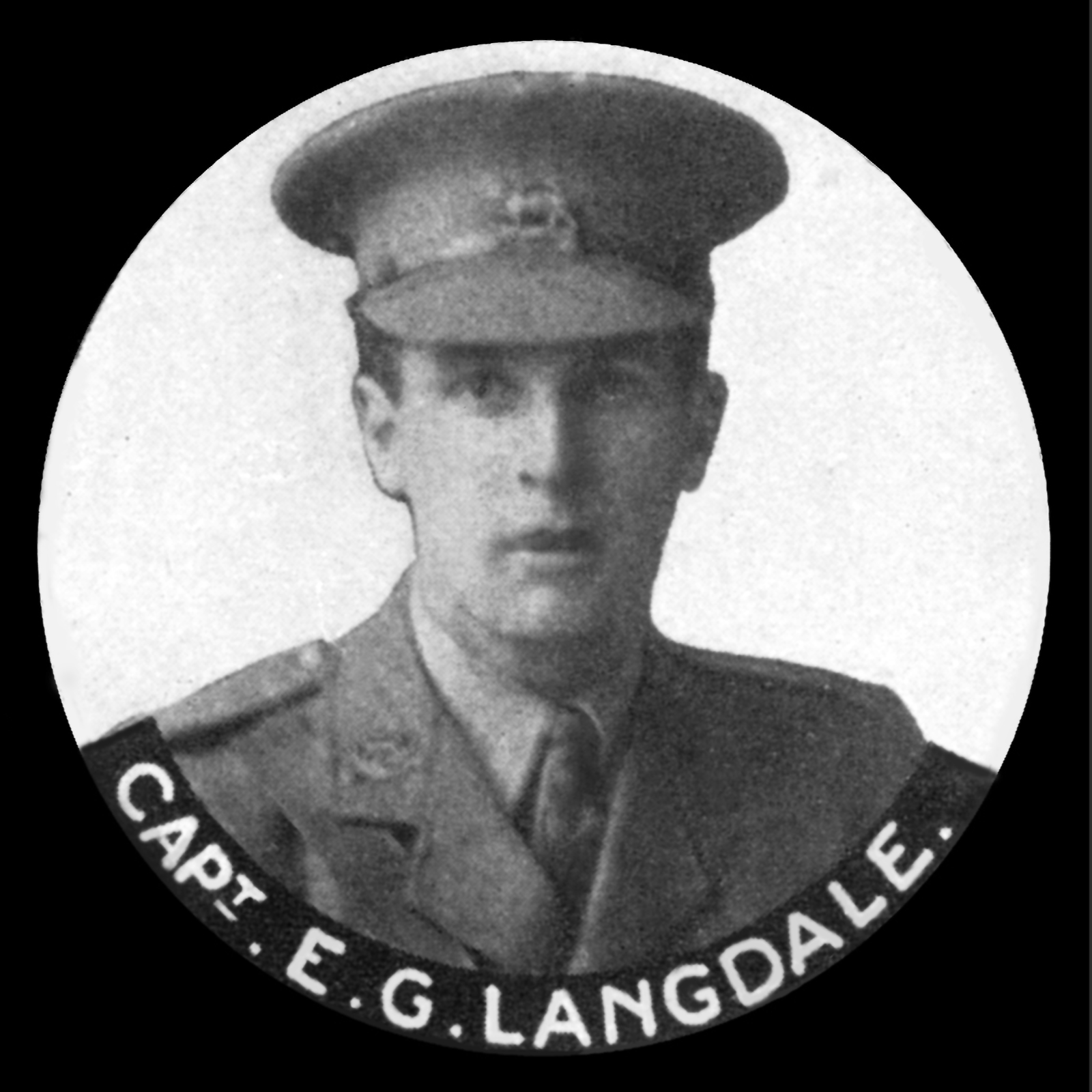 Captain Edward George Langdale was a master at Oakham School between 1912 and 1914 and in charge of the school's Officer Training Corps. He went on to command B company of the 5th Battalion Leicestershire Regiment largely made up of Rutland Territorials, and died leading his men in the disastrous attack on the Hohenzollern Redoubt during the Battle of Loos in October 1915. Edward received his Commission on 5 August 1914, the day after the First World War began. He went out to France on 22 February 1915, and was slightly wounded in the trenches the following September. Promoted to Captain, Edward was killed on 13 October 1915 as wave upon wave of troops tried to capture the German strongpoint known as the Hohenzollern Redoubt. The battle had started disastrously with men hurled against the seemingly impregnable German lines. Great bravery had been shown but little progress was made as casualties mounted. One company of the 5th Battalion had bombed its way for more than two hundred yards up a German trench known as "Little Willie" before its supplies of newly-introduced Mills bombs ran out and it had to retire. Forward troops were crowded into the redoubt all under heavy fire and at one time the men, finding themselves practically without officers, began to fall back. At this point, General Kemp ordered two more companies of the 5th Battalion to move up from the reserve to help stiffen the troops grimly holding on. The desperate need was for "bombs and officers." Captain Langdale, in charge of B Company, mainly made up of former Oakham Territorials, decided to advance in line, and leaving their trenches the four platoons started off in that formation. According to JD Hills in his book, The Fifth Leicestershire, the platoon commanders became casualties in the first few yards. "2nd Lieut. Marriott being wounded and the two others gassed, by the time they reached our front line the Company Commander was leading them himself. Walking along with his pipe in his mouth, Captain Langdale might have been at a Field Day, as he calmly signalled his right platoon to keep up in line, with "Keep it up, Oakham" as they crossed our trench. The line was kept, and so perfectly that many of the stragglers who had come back turned and went forward again with them. But once more as they were reaching the German front line came that deadly machine gun fire, and their gallant commander was one of the first to fall, killed with a bullet in the head. CSM Lovett was badly wounded at the same time, Serjt. Franks killed, and the Company, now leaderless, was broken into isolated parties fighting with bombs in the various trenches." Colonel Jones, who commanded the battalion wrote later: "We feel we have lost a fine man and an excellent officer. His duty was to lead his men to the attack and no men were better led, or went more willingly under such a commander." Edward was the the only child of Frederick and Ada Langdale, from Croydon. He was educated at Eastbourne College and Merton College, Oxford, where he graduated with Honours. He was captain of his school cricket Eleven for two years, and captain for one year of his college boat, and rowed once in the Merton Eight at Henley. He became a master at Oakham School and got married two days after war broke out, to Dora Janet. He left a baby daughter. Edward Langdale, who was mentioned in despatches, has no known grave and is remembered on panel 42 of  the Loos Memorial, at Merton College, Oxford, in Oakham School Chapel on Oakham's war memorial.

Edward George Langdale was born on 27th January 1883 in Kensington, London. he is also commemorated on the war memorial at Merton College, Oxford. He was at Merton from 1902 to 1906. I believe his parents were Frederick W and Ada M Langdale.
By simontcope on Friday 30th May '14 at 2:36pm
Schoolmaster: The Limes in Croydon 1906, Newbury Grammar School 1=907-08), King Edward V11 School in Sheffield 1908-12); he taught Mathematics with some Latin, English, History and Geography.Volunteered immediately on the outbreak of war.Mentioned in Despatches.Remembered on Panel 42-44 of the Loos Memorial.
By BN on Tuesday 17th June '14 at 4:37pm