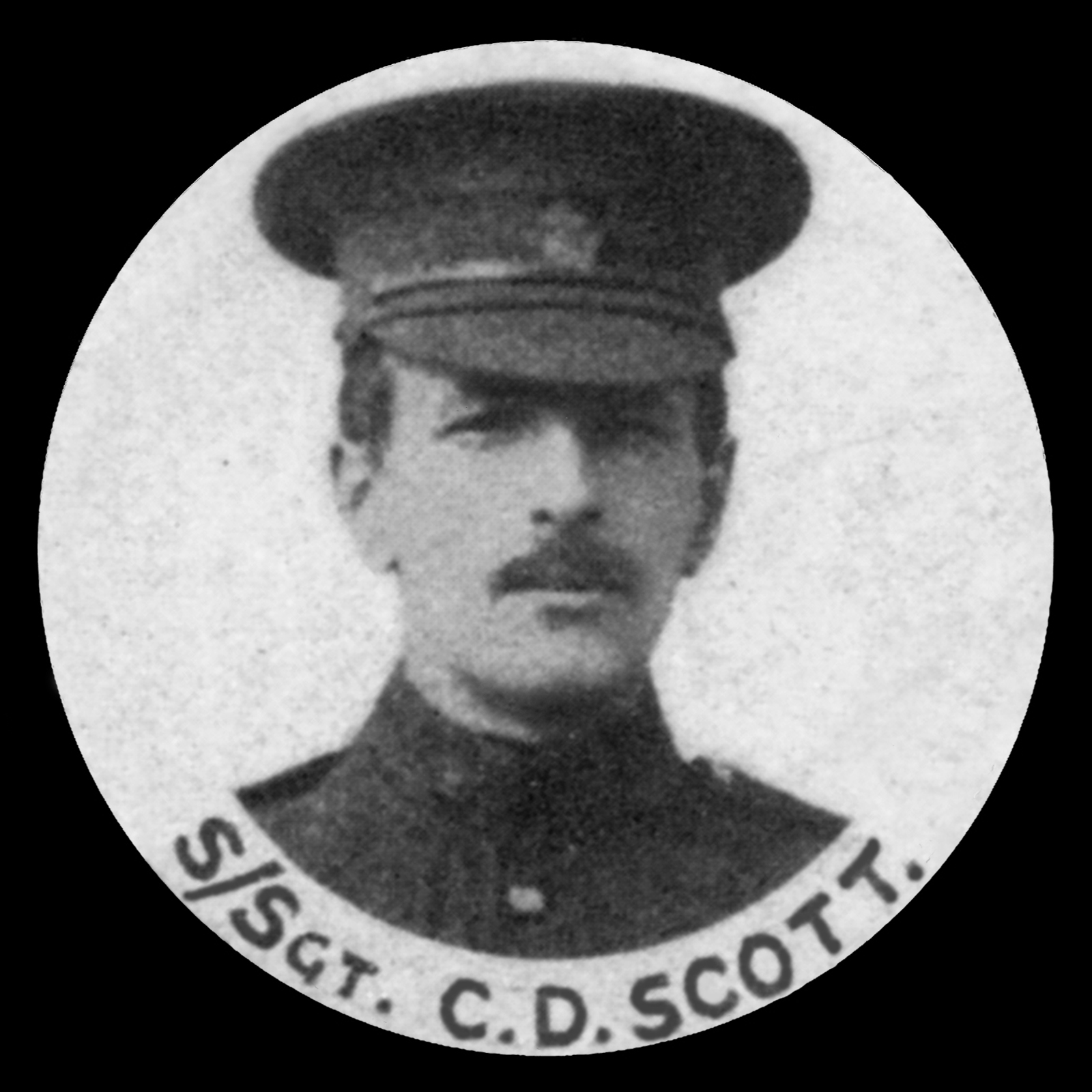 Claude Douglas Scott, who had emigrated to Canada, was one of eight Scott brothers from Oakham to fight in the First World War. His brother Charles also died, shortly after being discharged from the army because of ill health caused by injuries on the front line. Their father Joseph Scott was manager of Barclays Bank in Oakham, and all eight sons attended Oakham School. Joseph received a letter from Buckingham Palace congratulating him on the first seven of the eight sons enlisting: "Sir, I have the honour to inform you that the King has heard with much interest that you have at the present moment seven sons serving in His Majesty's Forces. I am commanded to express to you the King's congratulations and to assure you that His Majesty much appreciates the spirit of patriotism which prompted this example, in one family, of loyalty and devotion to their Sovereign and Empire." Claude, who was born in Kettering, emigrated to Canada in 1910 and worked as a salesman. He also served in the militia, in the North West Mounted Police (Strathcona Horse). He attested for the Canadian army on 22 December 1914 in Winnipeg and came over with the 32nd Battalion 3rd Canadian Army Corps. Claude served as Sergeant on the staff of Canadian HQ until his death from pneumonia on 30 November 1915. He was 25 and is buried in Kensal Green Cemetery in London, grave 173.8, and remembered in Oakham School Chapel. He left a widow, Ethel Ellen Scott.

The Commonwealth War Graves Commission plot is in area 173 of the cemetery. A very kind woman at the gate directed us and gave us a map. The cemetery is so big you are allowed to drive around in it
By Jimbo on Sunday 27th April '14 at 4:12pm
Born 1889Oakham School 1899-1901.Emigrated to Canada; 1911 Canadian Census includes him as aged 20, bachelor, a soldier in the barracks in Winnipeg City, Manitoba. Then he was for five years in the North West Moujnted Plice (Strathcona' Horse).Enlisted in 32nd Battalion of the Canadian Infantry (Manitoba Dragons), Army No 4/22562, and promoted to Sergant.Died of pneumonia in London, working on the staff of the Canadian Pay office, on 30th November 1916 without seeing any service at the front.Buried in Grave 173 8 of the Churchyard of All Saints, Kensal Green, London.He had seven brothers, all of whom served in the War and survived, and two sisters. His youngest brother, Charles Reginald Malcolm Scott, did not attend Oakham School (he was a boarder at The Elms School in Malvern in the 1911 Census, aged 15, as his parents had moved from Oakham, and while he was invalided out of the Army both in 1916 and then in 1918 (when he was discharged) he did not die until 1982.
By BN on Tuesday 17th June '14 at 6:17pm
2 images

On Monday 30th November 2015, I took my parents, Terry and Betty Scott, to visit Kensal Green cemetery in commemoration of the death of my great uncle, Claude Douglas Scott, who died exactly one hundred years ago. None of us ever met Claude, but it felt good to recognise his sacrifice on the centenary of his passing.
By C Scott on Monday 30th November '15 at 4:43pm