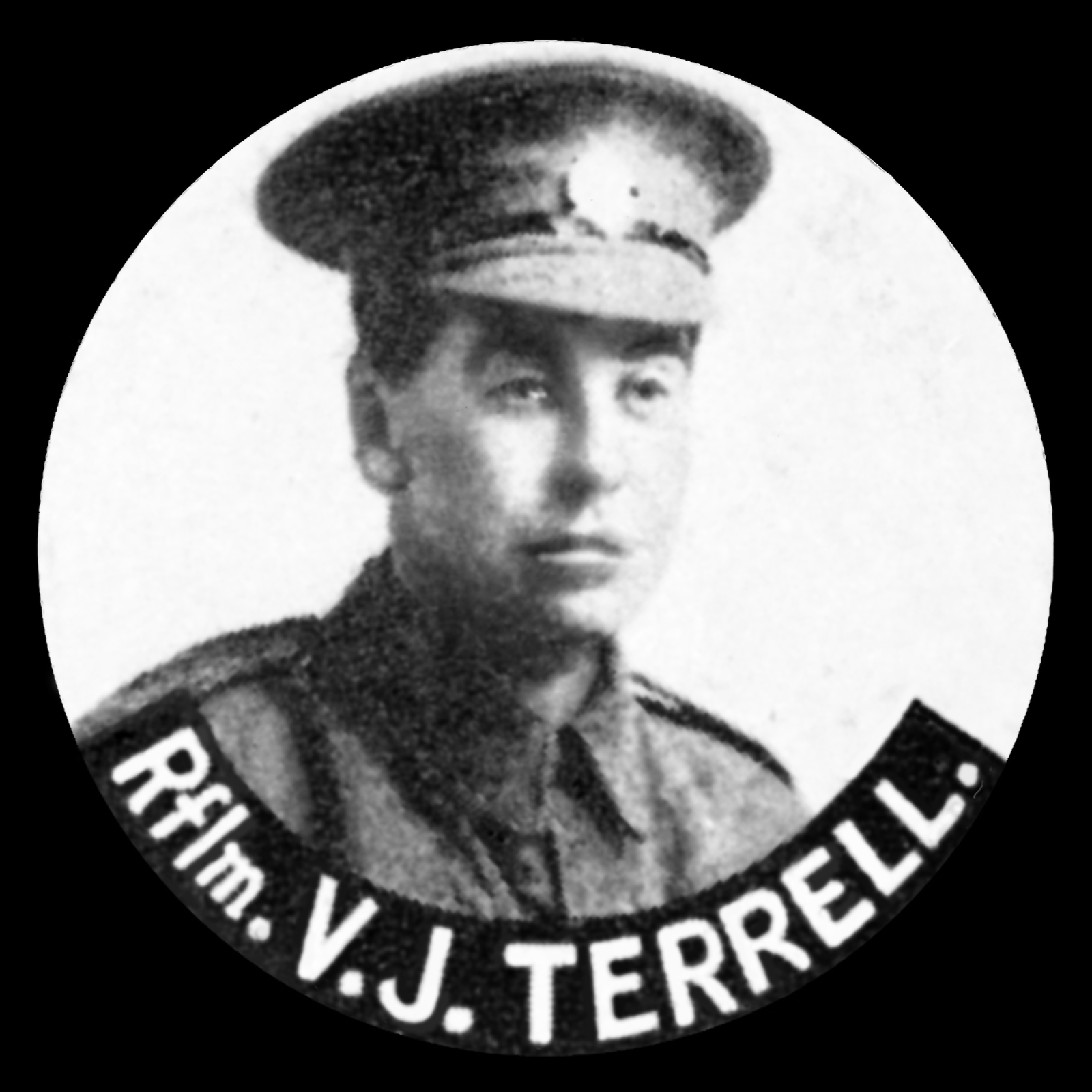 Victor James Terrell was the son of Walter and Annie Terrell of School House, Walter Road, Great Casterton and was born at Farningham, Kent, on 22 January 1888. Formerly an assistant master in St. Martin's Boys' School, Stamford, in September 1912 he went for two years' training at the London County Council Training College, at Islington. After leaving college in July 1914, he was appointed assistant master in St. Mary's Boys' School, Rotherhithe, London, where he stayed until he enlisted on 11 May 1915. He served in Belgium and France with the 1st Battalion London Regiment, and died on the first day of the Battle of the Somme, 1 July 1916, one of eight Rutlanders killed that day. The Londons, part of 56th (London) Division, were attacking Gommecourt, a heavily fortified village, as part of a diversionary attack to the main Somme battle. Their objectives were a German trench system in Gommecourt Park. Although things began well, they quickly encountered stiff enemy resistance and were unable to hold on to the little gains they made. Eventually the order was given to withdraw. Victor's battalion suffered 588 casualties, killed, wounded and missing. Rifleman Sidney Lause, a returned prisoner of war described what happened: "He was killed by the same bomb that wounded me. We had got into the German line on the attack, but had to retire. We had got to a shell hole when a bomb was thrown in by a German. Vic was killed by my side." He has no known grave and is remembered on Pier 9D of the Thiepval Memorial and also on Great Casterton's war memorial. He is also on a plaque in Little Casterton's church which was originally put up in Toll Bar Methodist Chapel, now a private house.

We are grateful to Ajax Bardrick for the following information:

VJT's father was the Head Master at Great Casterton's School, his son followed him into the profession.
He volunteers on 11 May 1915 with the London Rifle Brigade at their Corps H.Q. in the City of London as Rifleman No.2134, paying the 20 shillings per annum membership fee, & is assigned to its 3rd Battalion for training.
In Summer 1915 he marries a girl in South Witham.
In October 1915 he goes out to the Western Front with a reinforcement draft to join the Regiment's 1st Battalion, on arrival being assigned to No.9 Platoon of 'C' Company.
He spends November 1915-January 1916 in the trenches of the Ypres Salient.
From February-April 1916 1st L.R.B. are out of the line training to take part in the Big Push that was being planned for Summer 1916, which would become known as The Somme.
In May/June 1916 they are back in the trenches at the village of Hebuterne.
On 1. July 1916 V.J.T. falls in action during the 56th (London) Divison's assault on the German held trench fortress of the village of Gommecourt.
In April 1917 the War Office contacts the family & tells them to abandon hope that he is still alive as a prisoner of war given the length of time that he's been listed as missing in action & the German Government failing to acknowledge that they have him.
Thiepval Memorial
Find out more
Great Casterton War Memorial (St Peter and St Paul's Church)
Find out more
Little Casterton War Memorial and Churchyard (All Saints Church)
Find out more