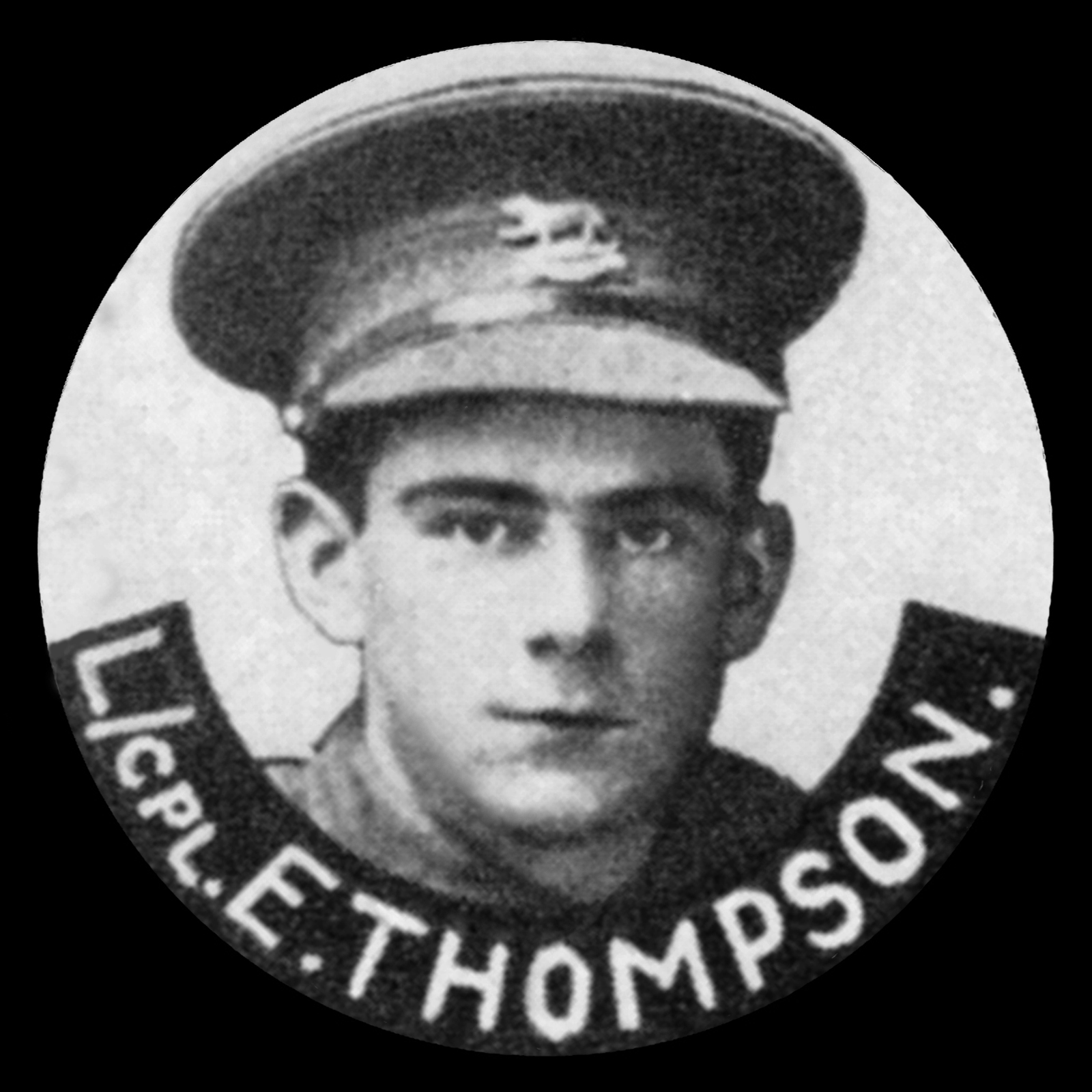 Sergeant Elijah Thompson came from Barleythorpe but was born in Lubenham, Leicestershire, the son of  Elijah Thompson Snr and his wife who later moved to Park Green, Elton, near Peterborough. He belonged to the Oakham Company Territorials, and went out to France early in the war with the 5th Battalion Leicestershire Regiment. Elijah took part in the Battle of Loos when the battalion was involved in fierce, costly and ultimately unsucessful fighting at the Hohenzollern Redoubt. Afterwards it was moved to take over a part of the line from French troops not far from Vimy Ridge and near the ruins of a small, red-bricked, red-tiled cafe called Cabaret Rouge on the main road linking Bethune, Souchez and Arras. By now Elijah was Acting Company Sergeant Major. In his book The Fifth Leicestershire, Captain JD Hills wrote: "The enemy opposite us were very quiet, and obviously knowing of the relief, were waiting to see what we should do. With the French there is no doubt they had a tacit understanding not to wage a vigorous war, though, while seeming inactive, they had at the time been undermining the French trenches. With us they were uncertain what to do, so for 24 hours did nothing except fire a few rifle shots, one of which came through the parapet and killed CSM E Thompson of B Company." George Phillips wrote in Rutland and the Great War: "[He was] a fine specimen of a soldier who had been through some very heavy engagements especially at the Hohenzollern Redoubt and carried the highest praise both from his officers and comrades." Major Beasley wrote to his parents: "He was shot through the head in the trench by a German sniper and killed instantaneously. He is a great loss to me and all the company. He is one of the few left of the old Oakham Company, and from the commencement of the war had risen from Lance Corporal to Acting Sergeant Major. Though so young a man, he was one I always knew I could trust and I knew his men felt the same. As soon as his death was reported I heard men saying, 'it's always the best that go,' or words to that effect." Elijah was originally buried in the cemetery at Ecoivres, close to Mont St Eloy. But his body was moved after the war to a large concentration cemetery, Cabaret-Rouge British Cemetery, grave XV.K.4, built on the site of the old cafe which had served as an Advanced Dressing Station as well as Brigade Headquarters. Elijah is also remembered on the Langham and Barleythorpe War Memorial.

Photographs below of Elijah, and his grave with his medals, are courtesy of Cath Steele. Elijah is far right in the first photograph and sitting down in the second.

Elijah was my husband's Great Uncle. He joined the 5th Leicestershire Regiment on January 31st 1912 aged 17 years and 4 months whilst working as a plumber in Oakham. The regiment went to France in February 1915, disembarking at Le Havre. Elijah was promoted through the ranks during the course of the next few months, and became sergeant in December 1915. At the time of his death, Elijah was on duty in the trenches in the Arras-Bethune area not far from Vimy Ridge when a stray bullet came through the parapet and killed him instantly. Elijah left behind his parents, 4 brothers and 5 sisters. During a family holiday in April 2013 we visited the Cabaret-Rouge cemetery and placed his medals on his grave.
By Catherine Steele on Sunday 6th April '14 at 1:23pm

Some pictures of Mr Thompson’s headstone, taken 12 April 2015.
By John Stokes on Wednesday 15th April '15 at 8:41pm
A Rutlander, living in Belgium