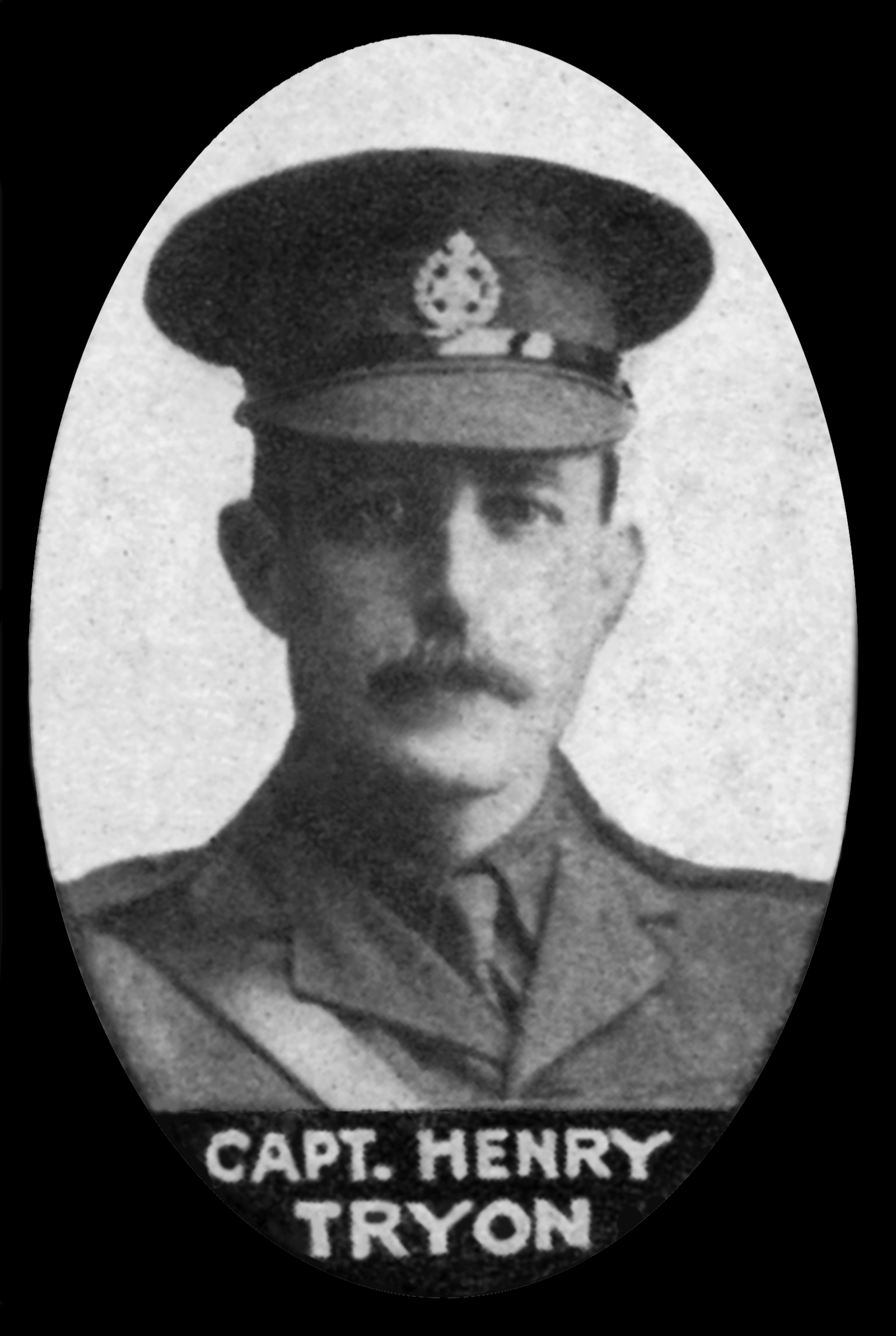 Henry Tryon, whose brother Richard also died in the war, had his life saved in battle by a corporal who won the Victoria Cross for his actions. Henry was born in Oakham around 1875, the son of Richard and Jane Tryon of The Lodge. He had emigrated to Canada and was farming in Chilliwack, British Columbia when war broke out. He immediately returned to Britain and enlisted in the Guards' School of Instruction at Chelsea Barracks, run by Major George Tryon. He joined the 15th Battalion of the Rifle Brigade as a Lieutenant on 1 December 1914, and was sent out to France on 7 August 1915. He was posted to the 8th Battalion which formed part of the 14th Division then holding the Ypres salient. On the night of 23 November Lieutenant Tryon was out on patrol with three men. One was hit and had to be helped back by another of the party. A little later Lieutenant Tryon was shot through the neck. Corporal Alfred Drake, who was with him, bound up the wound, despite being under heavy fire. Later a rescue party crawling near the German lines found Lieutenant Tryon unconcious but Corporal Drake dead, his body riddled with bullets. He had apparently given his own life and saved that of his officer and was posthumously awarded the Victoria Cross. Of the rescue party Lieutenant Gorell Barnes received the DSO, Lieutenant Backus the MC, and the two men, Rifleman J. E Beazley and Rifleman W. Hobday, the DCM for their courage. Lieutenant Tryon recovered from his wound and returned to duty on 26 July 1916. He was promoted to Captain in September and took part in the the Battle of the Somme. He died on 15 September in the Battle of Flers Courcelette when tanks first appeared on the battlefield. His battalion, part of the 15th Division, won their objectives but at terrible cost. Of 600 men who started that morning, only six officers and160 Other Ranks were left. Henry was one of those killed. The battalion war diary recorded what happened: "Battn moved forward under barrage. Very few casualties for first 150 yards. Heavy losses in next 200 yards. Many Germans in Pint trench. Pint trench captured. Battn reaches its objective Switch trench with no officers. Dug-outs bombed. Some prisoners taken. 2 machine guns captured, one blown up." As the battalion consolidated its new position, the Commanding Officer, Lieutenant Colonel Stewart, was wounded by shrapnel. At the end of the day the styrength of the battalion in Switch trench was six officers and 160 men. In a letter after the battle, Colonel Stewart wrote in tribute to Henry: "It was owing to the way Captain Tryon led his men and the glorious example set by him that they went on after he fell and accomplished what they did that day." Henry has no name grave and is remembered on Pier 16C of the Thiepval Memorial and on Oakham's war memorial, along with his brother.