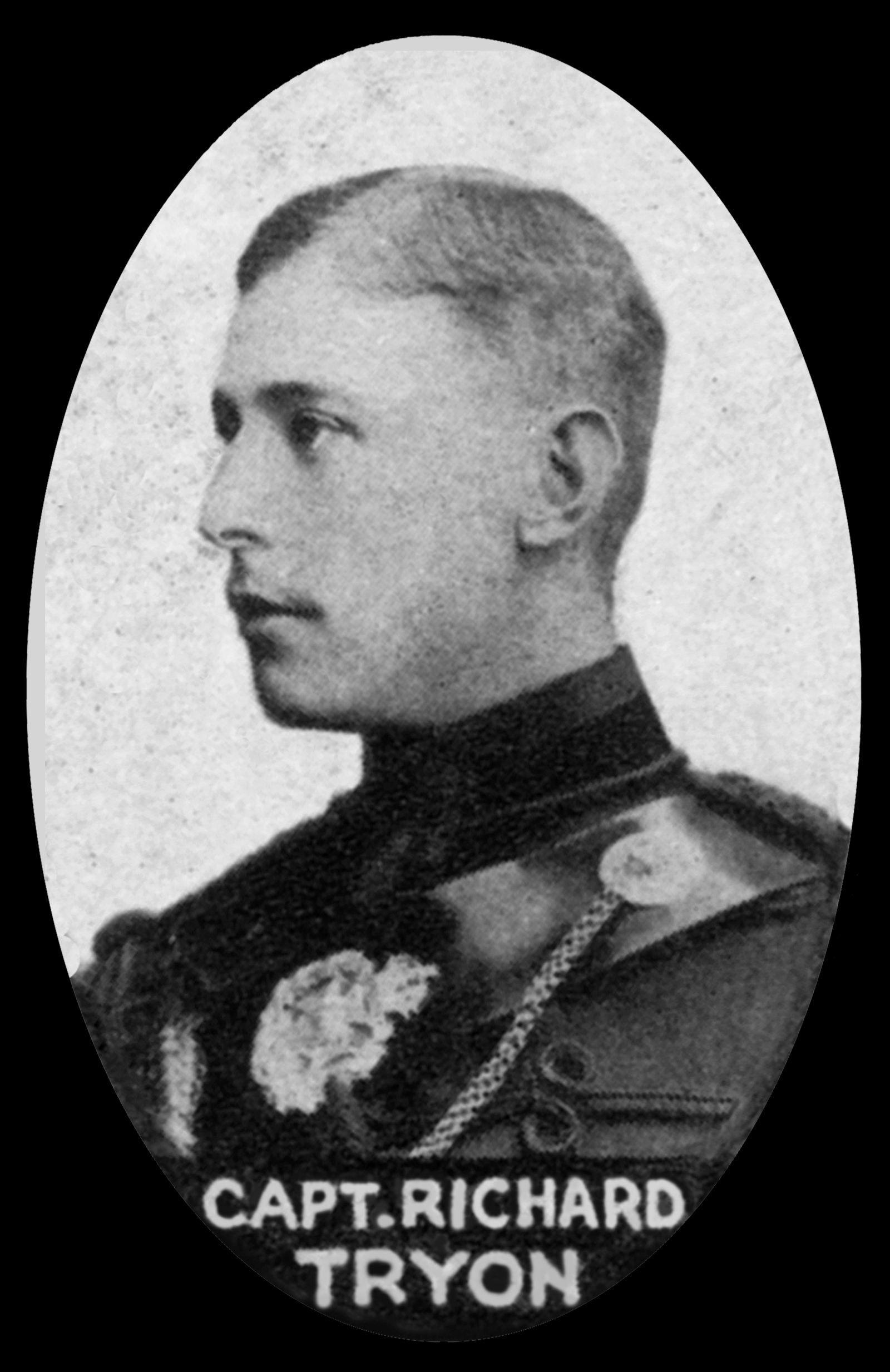 Captain Richard Tryon, whose brother Henry also died in the war, was a former professional soldier who rejoined the army when the First World War began. He was the eldest son of Captain Richard Tryon and his wife Jane, of The Lodge, Oakham, born on 17 May 1868 and educated at Harrow. He was gazetted to the King's Royal Rifles (in which his father served from 1854 to 1867) from the Northamptonshire Militia, on 17 January 1891, and joined the 3rd Battalion at Jullundur (now Jalandhar). He became a Lieutenant on 3 September 1892 and retired on 27 November 1895, joining the Northamptonshire Yeomanry and the Reserve of Officers. When the war broke out he was in South Africa, where he had interests in a gold mining property. He returned to Britain and joined the 6th Battalion Rifle Brigade, being gazetted Captain on 28 October 1914. Richard went out to France on 2 December and was attached to the 2nd Battalion King's Royal Rifle Corps. The battalion was in the Givenchy area near La Bassee. He was killed just over a month later, on 10 January 1915, at Cuinchy. A fellow officer [believed to be 2nd Lieutenant Dowden] described what happened: "There was a railway line with a fairly high embankment on which, previous to December 31st, 1914, we held an advanced post about 50 yards from a strong German position. Behind this, about 100 yards, we had an observation post, and on December 31st the Germans drove out our men and occupied it and the railway embankment between. It became necessary to try and dislodge the enemy from this position, and we were ordered to attack in small parties. I lost six out of my ten men, and was being heavily attacked by [about] 40 Germans. The observation post was also under heavy German machine gun fire. More men were sent up, led by Captain Tryon, who at once realised my party was in great danger and tried to come to my assistance. To do this he and his men had to go along the 100 yards of railway line which was exposed to a heavy fire from the German machine guns. He was the only one who got up to my position but was not there many seconds when he was shot through the head and killed instantly. The remainder of my men were killed or wounded. I myself was wounded but our forward fight allowed our people to strengthen the other post, so that it held against further attack. About 100 rank and file were killed and wounded. Of six officers who took part, three were killed and three were wounded." Captain Tryon had married, in 1894, Edith Campbell Watson of Colworth, Bedfordshire, and the couple had two sons. He has no known grave and is remembered on Panel 44 of Le Touret Memorial in France and also on Oakham's war memorial along with his brother Henry.