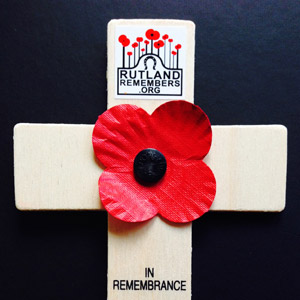 Not much is known about William Edward Clarke. He was born in Oakham and was the son of Edward and Sarah Clarke and had a younger brother George. The Clarke family had lived in Rutland for several generations, with links to Manton and Wing as well as Oakham. William was a Rifleman with the 6th Battalion King's Royal Rifle Corps and he died of pneumonia the day before the war ended. The family were living at 57 Northgate Street in Oakham at the time. William's service records haven't survived and so little is known about where he served throughout the war. He is buried in Oakham Cemetery, grave 24.35, and remembered on the town's war memorial. William has a Commonwealth War Graves record, which means he was still serving in the Army at the time of his death. A CWGC gravestone was ordered by his parents when he died, but for many years his grave was only marked by a private memorial which slowly fell into disrepair. In late 2015 the CWGC installed a new long-lasting marble headstone in the traditional pattern, which stands behind the remains of the private memorial. To find his grave walk down the left hand pathway from the entrance to the cemetery and pass the chapel. William's grave is two rows behind another CWGC headstone for Arthur Brader.