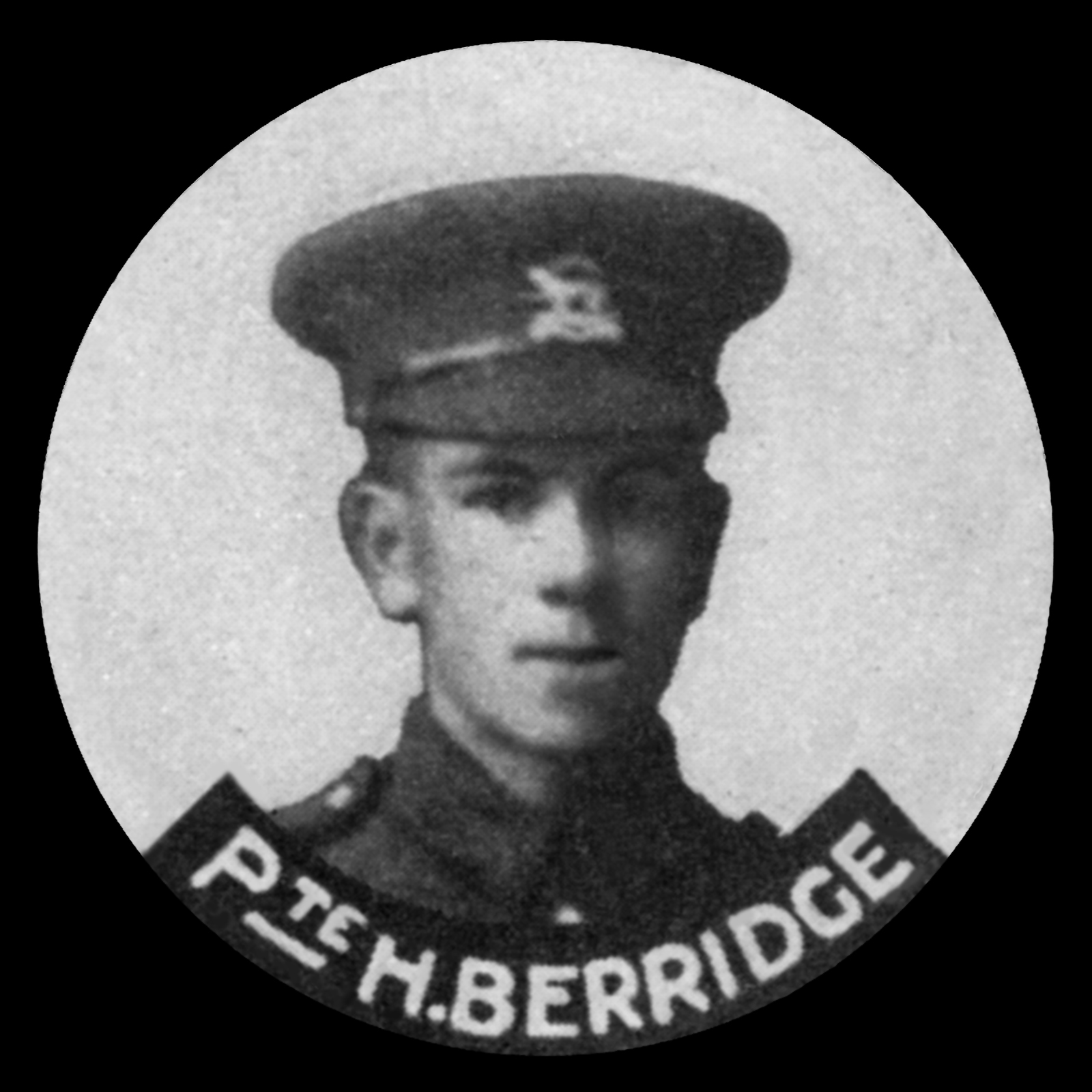 Private Herbert Berridge, a stretcher bearer during the Battle of the Somme, was one of three cousins from Morcott who were killed in the First World War. The other two were Neville Joyce and Edmund Joyce. And Herbert died on the same day and in the same action during the battle that another soldier from the village, James Woodward, was killed. Herbert was born in Ashby, Lincolnshire, the eldest of five children to David and Clara Berridge, nee Joyce, who later moved to Morcott. His mother Clara was the sister of Neville and Edmund's fathers. He enlisted in the 3rd Battalion Leicestershire Regiment on 14 May 1915, later transferring to the 8th Battalion with his friend William Shelvey, also from Morcott (see photograph below). The pair then had consecutive army numbers. Herbert was sent to the front on 11 December 1915. Ten months later he died after being severely wounded while acting as a stretcher bearer on 25 September 1916. The battalion war diary records: "At 12.30pm on the 25th the first attack was launched, the 8th Leicestershire Regt being in a position on the right of Flers. The object was the first German line, a distance of about 1000 yards from the trench from which the battalion launched the attack. The attack was made in waves, each platoon forming a wave, and two waves going over at a time. The attack was launched with splendid heroism, the first objective was gained in about a quarter of an hour, the men then stopped a short time to consolidate their gain, and to allow the artillery barrage to lift. They then pressed on to their second objective which was the village of Gueudecourt. By the time they reached the village their ranks were sadly thinner, by the tremendous artillery barrage the enemy put up, and by machine guns that wrought terrible havoc. Nevertheless with dauntless gallantry they pressed on reaching the village and engaging the enemy in hand to hand fighting, which took place all the night." Herbert's commanding officer wrote: "He performed his task with the greatest devotion and coolness under heavy fire. I always found him a cheerful and hard worker, and both I and the men feel that we have lost a willing helper and a good comrade." Herbert has no known grave and like William and James, he is remembered on Panel 3A of the Thiepval Memorial on the Somme and on Morcott's war memorial.

We are grateful to Keith Shelvey for the photograph of Herbert and William together.

A photo of Herbert's name engraved on a wall of the Thiepval Memorial
By Angela on Wednesday 14th May '14 at 5:42pm