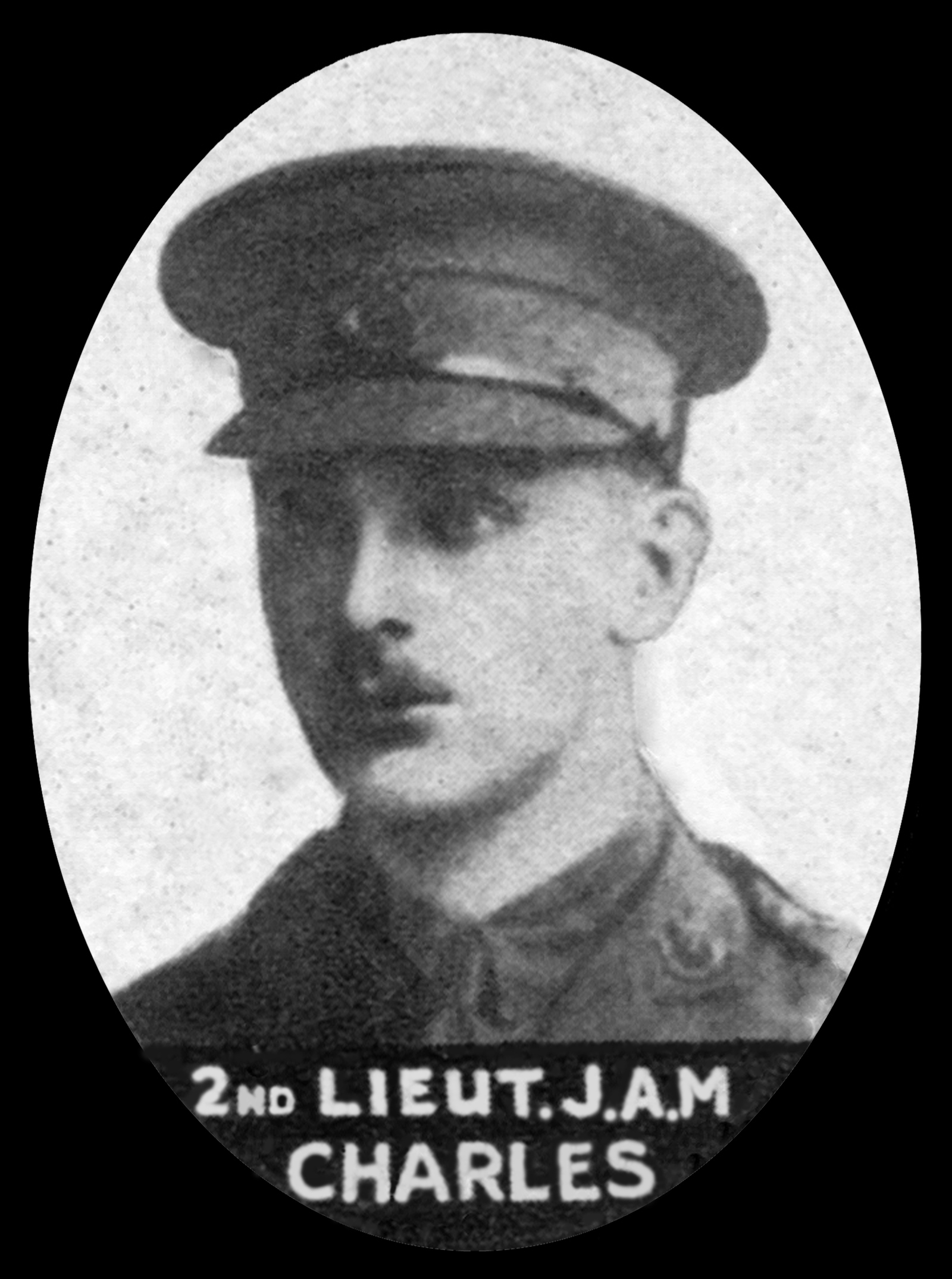 James Arthur Merriman Charles was the only son of the vicar of Oakham, the Reverend J H Charles. He was born at St Andrew's Vicarage, Whittlesey, Peterborough, on 7 February 1890 and educated at Harrow and Trinity College, Cambridge. On 5 November 1914, he was gazetted 2nd Lieutenant in the King's Shropshire Light Infantry having joined his regiment's Special Reserve in November 1912. He went out to the front early in the war and fought at the First Battle of Ypres. James was wounded by a bullet in the head at Rue de Bois, Armentieres, on 23 October 1914. He was in a trench only forty yards from the Germans, who were making desperate efforts to break through the Allied line, and was trying to reach some men of his platoon who were being hard pressed and enfiladed by the enemy. For eight hours he lay in the trench and continued to give orders to his men, his head having been bound up by his servant. He was carried under fire on a stretcher by two soldiers, who had volunteered, to the regimental dressing station where he was treated alongside his wounded colonel. Later he was sent to Boulogne and subsequently transferred to King Edward VII Hospital for Officers, at Grosvenor Gardens, London, where he died on 10 February 1915. His body was brought from London to Oakham, and he was buried in Oakham Cemetery with full Military Honours. A Captain wrote to his parents: "I know how very sorry all his brother officers and the men will be to hear of his death. He was always the life and soul of the Company during those dreary days on the Aisne and later in Belgium." Another captain wrote: "He was so chivalrous and had such a wonderful share of the qualities which should be possessed by a gentleman and a soldier; the honour and courage; gentleness and Christianity; generosity and kindliness and the strength and determination to do one's best for one's cause at any cost." His Colonel wrote: "The battalion has lost an able officer, one who was cheerful under all conditions, and very well fitted for his work." It was owing to his Colonel's confidence in him, and, as another brother officer wrote, "to the fact that the men would follow him anywhere, that he was honoured at the Battle of the Aisne by being chosen to hold advanced trenches against the enemy, and also again at Armentieres." James was a keen cricketer, and played for his House at Harrow at both football and cricket, and was also 12th man for the Harrow cricket eleven, 1908 as well as being a member of the Harrow Philathletic Club. He is remembered on the war memorial outside his father's old church in the centre of Oakham. He is buried in Oakham Cemetery, alongside other members of his family. His grave is near the chapel in the middle of the cemetery and is the cleaned grave slightly to the left hand side.  It is maintained by the Commonwealth War Graves Commission.