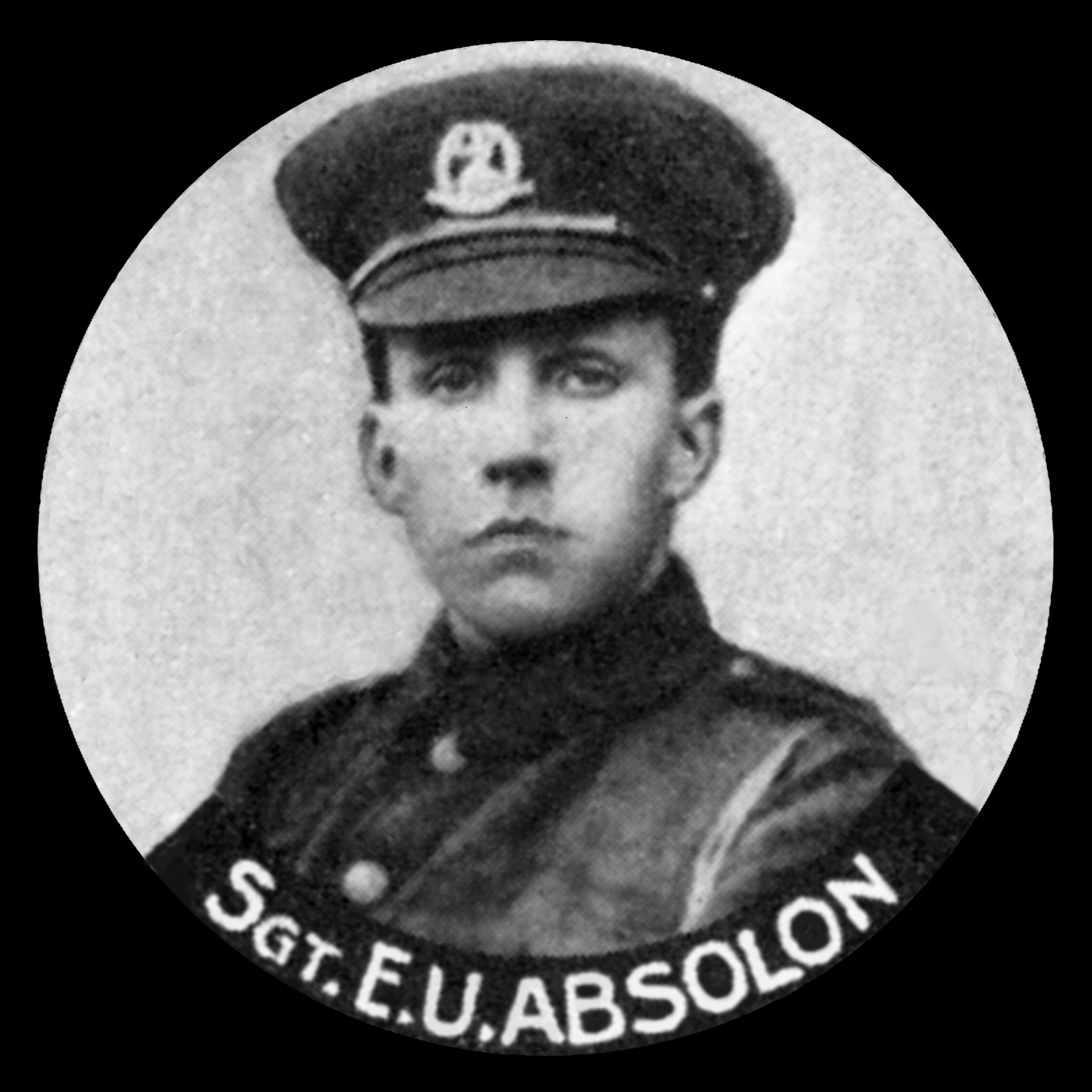 Sergeant Edwin Urquhart Absolon died in one of the few successful actions on the first day of the Battle of the Somme. He was the son of Edwin Absolon of South Luffenham, and was born at Kentish Town, London, on 1 January 1896. Before volunteering on 15 September 1914, he worked at Pontifex and Company, Shoe Lane, London, as a clerk, having come out on top of the list of London County Council school scholarships. He was also learning to become a draughtsman. He enlisted in the 10th Battalion Norfolk Regiment and tranferred to the 8th Battalion. He went out to France on 20 July 1915. Edwin died on the first day of the Battle of the Somme, 1 July 1916, when, according to George Phillips, he was killed by a machine-gun bullet which struck him in the head at Pommiers Redoubt, a German stronpoint. The 8th Norfolks were part of 53rd Brigade with the objective of attacking German trenches north of Carnoy and south-west of Montauban. The Norfolks' battalion war diary describes how 1 July began calmly with tea brought up from Carnoy at 5.30am. The men's commanding officer wrote: "The demeanour of the men was admirable; an atmosphere of quiet confidence and determination prevailed amongst all ranks, which augured well for the success of the undertaking." At 7.20am British artillery opened up with an intense bombardment and then the assault began at 7.30am. The two assaulting companies moved forward in four successive waves and met with early success. "There was no rush or charge...the movement being carried out calmly, at a walking pace with methodical precision, rifles slung over right shoulder." The first German trenches were captured easily and any Germans found were "thoroughly cowed and at once surrendered." Things began to get more difficult as the advance continued and came under enfilade machine gun fire. Casualties began to mount and the two leading Companies were reduced to around 100 and 90 men. Pommiers Trench, an early objective, was taken at 10.30am despite some troops being held up by machine gun fire from another German strongpoint. It was here that Edwin was reported killed. The Norfolks eventually reached the German trench known as Montauban Alley with losses for the day of 3 officers and 102 men killed. Edwin was buried at Carnoy but it is assumed his grave was destroyed in subsequent fighting. He is remembered on Pier 1D of the Thiepval Memorial and also at South Luffenham.

Teddy (or Edwin Urquhart George Absolon) was born in London in 1896 to Edwin Absolon (a miller of Bradwell, Norfolk) by his first wife, Elizabeth Roberts of Manchester (granddaughter to John Roberts, a successful billiards player of some renown.) After 3 years of marriage Edwin & Elizabeth divorced and he was given custody of his young son. The photo I have shows Edwin and Teddy with a rather poignant flower placed on the chair, perhaps indicating loss. Teddy was their only child. When Teddy was 4 years old his father married again, this time to Caroline Dancey. Teddy gained 2 half-brothers and a half-sister between 1902 and 1907. Between 1907 and 1910 the family moved to Mill House, South Luffenham, where Edwin senior took employment as the miller. With paternal ancestral links to Norfolk perhaps it is unsurprising that Teddy enlisted into the 10th Norfolks. Teddy's mother, Elizabeth, remarried but lost her new husband after only 4 years. She died in 1918 having lost her husband and only son.
By Deejo on Wednesday 5th November '14 at 7:48pm