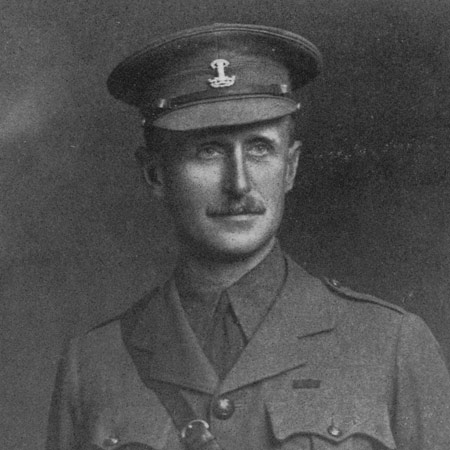 Lieutenant Colonel Percy Cecil Evans-Freke of Bisbrooke Hall was killed in the Battle of Frezenberg on 13 May 1915 as the Leicestershire Yeomanry took part in intensive fighting to stop the Germans from capturing Ypres. He was born in London, the second son of Lord Carbery and Lady Victoria Cecil. Percy was commissioned into the Yeomanry in December 1895 and was promoted Lieutenant in March 1899. During the Boer War he served with the 4th Battalion Imperial Yeomanry (Leicestershire and Derbyshire) and was awarded the Queen's Medal and four clasps. Percy returned to the Leicestershire Yeomanry after the war, becoming Captain in May 1903, Major in February 1905, and taking over command in 1913. The Regiment was sent out to the Western Front on 2 November 1914 and took part in the later stages of the first Battle of Ypres. The following May the Germans made their second attempt to capture Ypres and open the way to the Channel ports. Percy was killed on 13 May 1915, one of more than 12,000 British casualties in the battle of Frezenberg Ridge fought just outside Ypres and which succeeded in blunting the German offensive and saving the town. The Yeomanry, part of 3rd Cavalry Division, suffered particularly heavy losses. The author Sir Arthur Conan Doyle wrote in The British Campaign in France and Flanders: "All the infantry losses, heavy as they were, are eclipsed by those of the third Cavalry Division which bore the full blast of the final whirlwind, and was practically destroyed. This splendid division, to whom, from first to last, the country owes as much as to any body of troops in the field, was only engaged in the fighting for one clear day, and yet lost nearly as heavily in proportion as either of the infantry divisions which had been in the firing line for a week. Their casualties were 91 officers and 1,050 men. It was a most murderous affair, and they were only driven from their trenches when the trenches themselves were blasted to pieces. It is doubtful whether any regiments have endured more in so short a time. The Leicestershire Yeomanry suffered very severely, Colonel Freke and many senior officers were among the dead and wounded." In Rutland and the Great War, George Phillips wrote: "Several versions have been given of how Colonel Evans-Freke met his death. The following is that of a reliable eye-witness: "I was in the fight in which Colonel Freke was killed, in fact, I had been in personal touch with him up to five minutes before I saw him fall. Things were rather hot, and I happened to be one of a small party, who, with Colonel Freke, had become detached from the main portion of the squadron who were holding a length of trench. We were in touch by signal, however, and a message came across that Major Ricardo was hit. Thereupon Colonel Freke walked out across the open to join the party in the trench about eighty yards away. He had covered the greater part of the distance when we saw he had been struck in the arm. He still went on to within five or six yards of the trench when he fell. He had been struck again. His soldier servant, who was in the trench, picked him up, but he was dead. His body lies buried in the cemetery close to Breelin Crossroads, near Ypres. A brave, absolutely fearless soldier, loved by all who knew him. An able commander, unsparing of himself, whose thoughts were always for the comfort and safety of those committed to his care, he sacrificed his life in the noblest cause - in defence of the honour of his country and of those who could not defend themselves." Percy married, in July 1895, Eva, the daughter of Charles Kirwan of Dulgan Park, Co. Mayo, and Mrs Maitland-Kirwan of Gelston Castle, Kirkcudbright. He was a keen huntsman and became secretary of the Cottesmore Hunt. Percy Evans-Freke now lies in Divisional Cemetery, grave E.5, on the outskirts of Ypres. A new memorial to the Battle of Frezenberg and the part played by the Leicestershire Yeomanry was unveiled on the former battlefield in May 2015 by Percy's great-grandson, Colonel Robert Boyle. Percy's original grave markers are displayed on the wall in Bisbrooke Church where he is remembered on the war memorial. There are also family memorials in Glaston church and a plaque in Laxton Church. He is also remembered on the Leicestershire Yeomanry Memorial in Oakham Castle. Percy Evans-Freke's descendants still live at Bisbrooke Hall.

Some pictures of the headstone, taken 14 December 2014
By John Stokes on Sunday 14th December '14 at 7:27pm
A Rutlander, living in Belgium