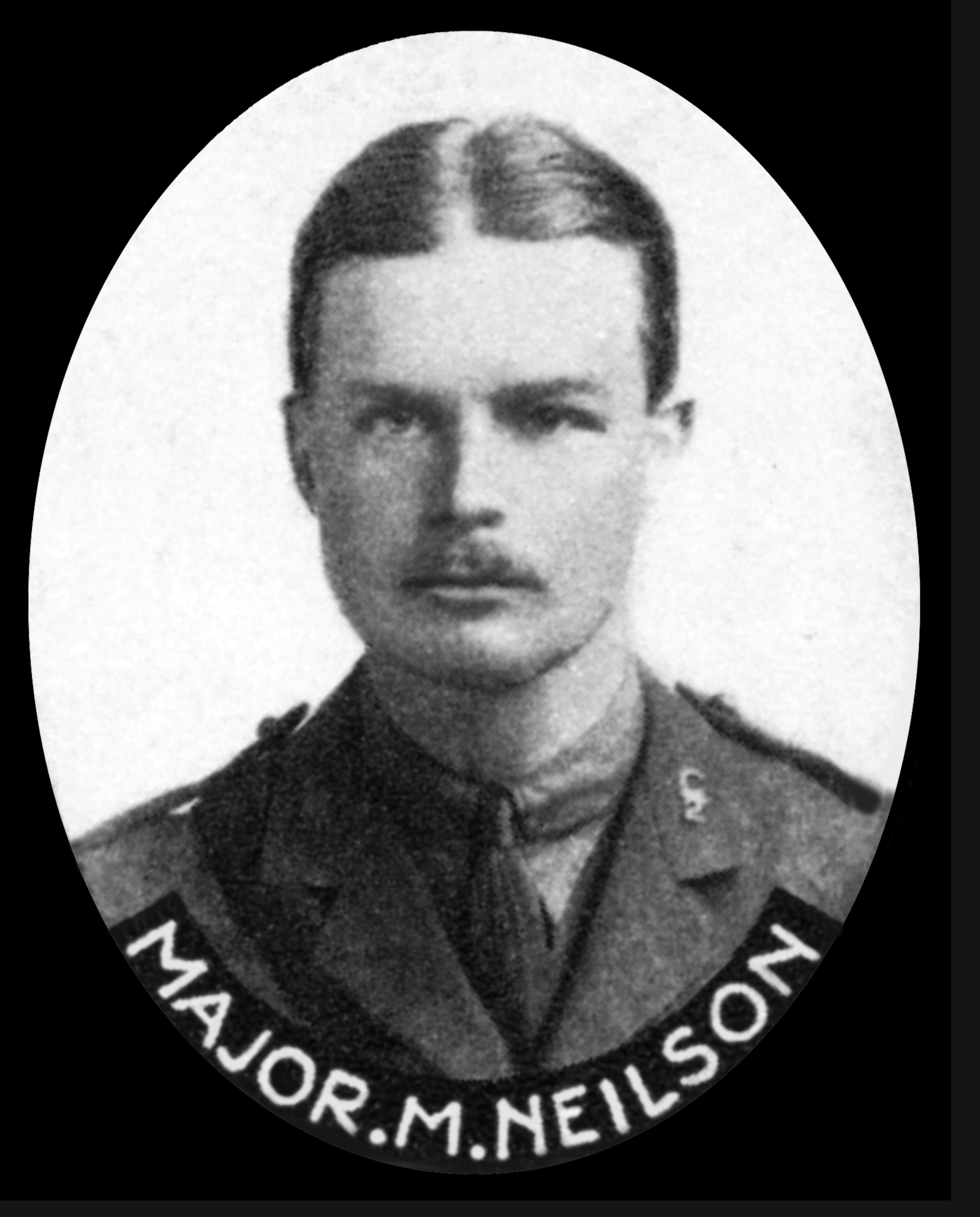 Major Malcolm Arthur Neilson, whose brother Donald also died in the First World War, was born at Kettering on 3 September 1894 and took part in the successful storming of Vimy Ridge by Canadian forces. He and his brother came from Lyddington, sons of William Fitzroy and Anna Helen Neilson, of the Rockery, and both were among the first to enlist. Malcolm entered Oakham School in 1908, and when the war broke out was a student at Ontario Agricultural College, Canada. He joined the 2nd Canadian Infantry Battalion as Sergeant, presumably on the basis of his officer training at Oakham School and his membership of the local militia, and left for France in January 1915. He received his Commission a few months later, and was promoted to Major in the autumn of 1916. He fought in the 2nd Battle of Ypres in April 1915, when the Germans first used poison gas and the Canadians faced it without masks. Malcolm had a serious accident while teaching in a grenade school in France on 28 December 1915. He was invalided home, but returned to the front in September 1916. The Battle of Arras began on 9 April 1917 and he fought in the action that captured Vimy Ridge, a long, gradual slope, which reaches a height of more than 450 feet at the summit. "Sweeping onwards with irresistible fury, they overran three lines of German trenches, including the famous La Folie Farm, captured the village of Farbus and secured the splendid total of 70 officers and 3500 men as prisoners." It was quite early in this attack that Major Neilson was killed by a shell while helping his servant who had previously been hit. A brother officer wrote: "He was not only admired and respected, he was loved. It was generally conceded that he was one of the most able and efficient officers in the battalion. But to those of us who knew him intimately, who lived and worked with him, he was not only an exceptionally able soldier, but a gentleman of the first water. He lived his life with a definite purpose for usefulness. He was clean in thought, word, and action. He had a clear conception of the obligations of life, and, with benefit to all who came in contact with him, he tried with success to carry them out." He lies buried in the cemetery at Ecoivres, grave V.D.5, and is remembered on Lyddington's war memorial, the war memorial in Stoke Dry where his mother was living at the time of his death, as well as in the Chapel at Oakham School. Oakham School Magazine wrote: "Captain M A Neilson returned to England just over two years ago with the Canadian forces holding the rank of Sergeant and after short training went to the front. He was soon commissioned to a Lieutenancy. Early last year he received head injuries at a Grenade school and was incapacitated for about six months. He returned to the Front in the middle of the summer." The Commonwealth War Graves Commission has his age as 23.

Two of my great-uncles are mentioned on the website - Donald Francis Neilson and Malcolm Arthur Neilson. I have visited both Tyne Cot Memorial where Donald is mentioned and Malcolm's grave at Ecoivres Military Cemetary. I never heard my grandmother talk about the loss of her two brothers but it must have had an impact as she married my grandfather in 1919 and they settled in Kenya. I imagine she used the challenge of living in Kenya as a way of coping with the loss. One of the few possessions she had left when she died is a watercolour of Lyddington Main Street and the Church.
By Nairobigal on Monday 26th May '14 at 7:51pm

Some pictures of Mr Neilson’s headstone, taken 12 April 2015.
By John Stokes on Wednesday 15th April '15 at 5:51pm
A Rutlander, living in Belgium
The Belleville Intelligencer, May 27, 1915“Death of Sergt. Ablard.Mrs. H.C. Ablard of Wharf street, Belleville, has received the following letter from Sergt. Malcolm A. Neilson."… I feel I must write you a few lines to express to you my great sympathy for your loss and also to tell you something of the splendid conduct of your husband in the last fight.I shared a tent with Harry and two other Sergeants all the time we were at Salisbury Plain, and since we came out here I had lived with him practically all the time. I really cannot tell you what a splendid comrade he was. … You will be glad to hear that his thoughts were often with you and his children. He would speak of you and them with pride and affection, and you have good reason to be proud of him.In the great fight near Ypres our company had a hot corner to hold. On the morning of Friday, April 23rd, he gallantly placed himself in a very dangerous position, from which one or two men could fire into the German trench. Someone had to do the work and most heroically it was done. Your husband, I am told, shot down sixteen Germans before he was shot in the head. He lay unconscious for about an hour, and then died. He cannot have suffered at all. … Harry was reverently and carefully buried by his comrades at a spot not far from the village of St. Julien, of which you may have read in the papers.I am Yours very sincerely,Malcolm A. Neilson.”Henry "Harry" Ablard was my great-grandfather on my mother's side, and sadly died at the 2nd Battle of Ypres in April 1915. I am most grateful to Malcom Neilson for taking the time to write to my great-grandmother Ethel, whom I remember from my childhood, for his soothing words in those sad and troubled times. I am saddened to learn that Major Neilson also perished in this war to end all wars a few years later.
By djwalton on Tuesday 21st February '17 at 1:02pm