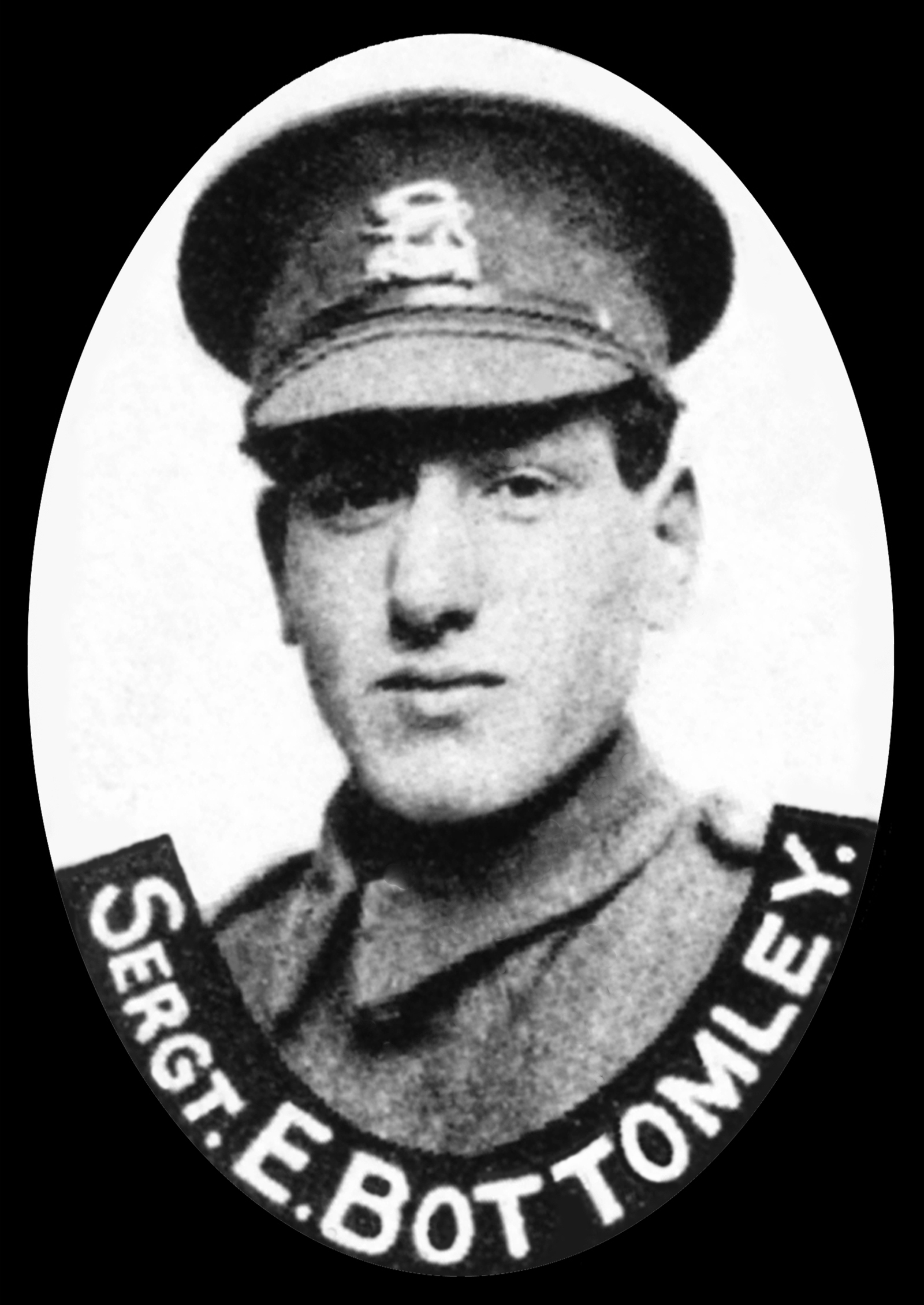 Edward Bottomley, his elder brother Thomas and his cousin Joseph Sullivan who lived next door, all died in the First World War, in successive Septembers. Edward was the son of John and Annie Bottomley, of 71 Stamford End, Exton, and was born at Exton on 7 March 1897. He was a farm worker before enlisting on 9 December 1914. He served with the 5th Battalion Leicestershire Regiment in France, where he died of wounds on 5 September 1918. In The Fifth Leicestershire, Captain J D Hills described how Battalion Headquarters had moved to a newly-captured German shelter. "At first we thought we were going to be let off any retaliation at all, but the following morning at "stand to" a fairly heavy barrage came down for half-an-hour on the breastwork support line - presumably to break up any intended attack. B Company Headquarters most unluckily received a direct hit causing six casualties. Two Serjeants who could ill be spared, A Cross and E Bottomley, were both badly wounded, the latter mortally." Edward is buried in Fouquires Churchyard Extension in France, grave IV.G.4, and remembered along with his brother and cousin on the war memorial in Exton. All three men died almost exactly a year apart: Thomas was killed in September 1916 aged 24, cousin Joseph in September 1917 and Edward in September 1918.

Source: Michael Doyle Their Name Liveth For Evermore: The Great War Roll of Honour for Leicestershire and Rutland. He was the son of John Bottomley a farm waggoner, born 1862 in Exton, Rutland and his wife Annie, born 1868 in Exton, Rutland. Edward was born in 1897 in Exton, Rutland, his siblings were Thomas, born 1893, George, born 1895 and Charles, born 1899, all his siblings were born in Exton, Rutland, in March 1901 the family home was at Stamford End, Exton, Rutland. In April 1911 Edward was employed as a farm labourer and was residing in the family home at Stamford End, Exton, Rutland together with his parents and siblings, George, Charles, Lizzie, born 1902, Sarah, born 1903, David, born 1906 and James, born 1909, the latter four siblings were all born in Exton, Rutland. Before enlistment he was an agricultural worker. He died from his wounds while serving in France. His brother Thomas also fell. The War Diary for today records. RICHEBOURG. 5.00am. Enemy bombarded Battn front with guns of all calibres. Direct hit obtained on B Coy HQ 2 Sergeants, 2 runners and 2 servants wounded. Sergeant BOTTOMLEY and Private G. S. BOTT (a runner) subsequently died of wounds. Latter had been Coy runner for very long time and rendered invaluable service. No other casualties caused. Lt T. H. BALL went to Army School. Orders received that Division would be relieved by 19th Division at once. Relief to start at dusk. 9.00pm. 8th Battn NORTH STAFFORDSHIRE REGT marched via ROUTE B and relieved the Battn. Just before relief quietness of enemy led High Command to suspect further withdrawal. Patrols sent out to gain touch and enemy found still strongly holding line east of original GERMAN front line. C.S.M. PASSMORE of A Coy killed by machine gun fire while returning from reconnaissance.http://www.leicestershirewarmemorials.co.uk/war/casualty/view/29862
By John Stokes on Thursday 25th December '14 at 2:57am
A Rutlander, living in Belgium